Bumblebee is the sixth film in the Transformers movie series, which was badly in need of a turnaround after the fifth installment The Last Knight didn’t meet expectations at the box office. Now the movies had been getting crushed by critics, bloggers, etc for some time but had been bulletproof until then even as it committed nearly every movie sin you could think of: confusing plots, too many subplots tacked on for no good reason, bad dialogue, gratuitous cheesecake shots of the female leads, and just being too damn long. The shortest of the first five films was 2 hours and 20 minutes and by the fourth film, Age of Extinction, they’d gotten up to 2 hours and 45 minutes. Now that is way too much time for these kinds of movies, yet it didn’t seem to bite them until Last Knight. So into the void during this time of need comes Bumblebee, which was a prequel to the first five films and seen by some as a soft reboot of the whole thing. 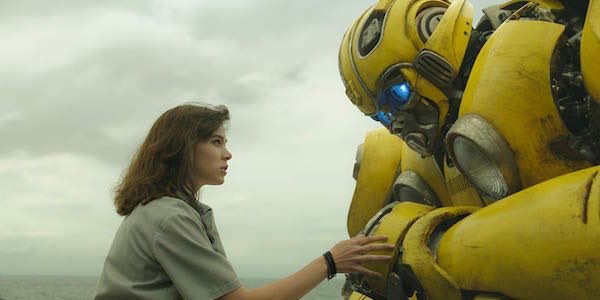 It came out during a crowded December, which absolutely hampered it box office numbers. Aquaman hit for over a $1 billion and threw a huge unexpected monkey wrench into the grosses for both this film and Into the Spider Verse, which dropped during the same month. There was also the matter of The Last Knight and the goodwill it squandered among anyone who was on the fence about continuing to go see Transformers movies. Hell, I even waited until now to watch it myself. So it had a pretty uphill climb no matter how good it was on its own. Which of course is why we’re here right now, to hash out just how good or bad I thought it was. So what’s good?

No Michael Bay is addition by subtraction in its highest form. Bay is good at action sequences and blowing stuff up real good. He’s not good at much else and he’s a real creepy kind of dude (go read up on Megan Fox’s audition for the first film….yikes) so getting him out of the director’s chair is a win all on its own. Travis Knight in one film showed a much better sense of what Transformers fans want than Bay did in five.

The Cybertron scenes, as brief as they were, are exactly what we’d been wanting all this time. The original cartoon designs for Autobots and Decepticons were a breath of fresh air and seeing not just Optimus Prime but Soundwave, Ravage, and Shockwave in their full glory is something we’ve been begging for to no avail for years. Putting them in here is a nice signal that you’re listening to the people who will come back to your movie franchise if you take the right approach.

The plot was nice and simple compared to the previous films. The Autobots fled Cybertron as it fell to the Decepticons, hiding out on different planets until such a time as they could all get together again to fight back. After being damaged in a fight with Deception Blitzwing Bee is discovered by Charlie Watson, an 18 year old living with her mom and working a dead end job at an amusement park. Charlie gets him working, he reveals himself, and the fun begins. Two other Decepticons discover that Bee is on Earth and make a deal with the US government to find him. The hunt is on and culminates in the expected big fight scene. Compared the overstuffed plots of the previous films this is a godsend.

There were a few clever callbacks like a few seconds of Stan Bush’s “The Touch” from the original Transformers animated movie in one scene and a closing shot of Bee driving alongside a truck the looked like Optimus Prime’s vehicle mode from the original cartoon and toy series. The movie soundtrack was chock full of 80s goodness to match the setting of the film like Tears for Fears “Everybody wants to rule the world” and A ha’s “Take on Me”.

Hailee Stanfield was good as Charlie, and Knight did a good job of making her likeable and believable without a million ‘oh she’s so hot’ angles, close ups, etc. And look a few of those are fine, I’m not that much of a prude, but there comes a point with some directors like Bay that it becomes obvious why they cast who they did for that role.

Not a whole lot, to be honest. The military guys were dumb as always, except this time there weren’t any sensible ones to balance it out like in the first three films. John Cena’s Agent Jack Burns was a less ridiculous version of John Turturro’s Agent Simmons from the first three movies, and his line delivery bordered on self parody.

The other thing is that while losing Michael Bay was great for the story and not exploiting the actresses onscreen, it also brought with it a loss in big event-ness. There were some decent action scenes but none of the big set pieces that made the Bay directed films watchable no matter how bad the rest of the movies were. It’s a shame that they couldn’t have just gotten one in there because that might have juiced the box office just a little.

The box office for this one finished smack dab in the gray area, $468 million on a $135 million budget (according to wiki), which means that it was profitable but maybe not enough for the studio to jump in with both feet on more films. If they do go forward they’re gonna need to up the budget and add some more oomph to the action sequences.

Good but not great. I don’t feel like I missed anything by not catching it at the theater but I’m glad I took the time to watch it at home. Had I bought it on DVD sight unseen I wouldn’t feel like I wasted my money. It’s an easy watch and imminently rewatchable, but just not earth shattering in any way. Fine for an on demand rental if you’re curious. I give this one a 4/6, which equals good on my new scale.