WWE Money in the Bank Thoughts and More 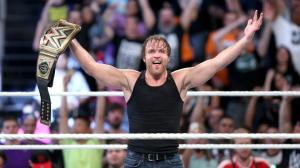 Well, in a matter of days things got really interesting in WWE land.  We got our fastest successful Money in the Bank cash-in when Dean Ambrose caught Seth Rollins slipping and pinned him for the title just mere minutes after Seth won it from Roman Reigns and barely an hour after winning the briefcase himself.  Then we got a blockbuster announcement on RAW that the long awaited Shield Triple Threat Match for the title would be taking place not at Summerslam or WrestleMania but at….Battleground?  But then today that seems to be moot because Roman Reigns has been suspended 30 days for violating the company’s wellness policy.  Wow….  That’s a whole to chew over so let’s get started.

Money in the Bank

As annoying as it was for the announce team to be calling it the Greatest Money in the Bank Ever from the time it started, I gotta think it lived up to that.  I don’t think there was actually a bad match on the show.  The matches that needed to be short were kept that way, and the big matches got the time they needed to live up to their billing.  Even the matches I questioned having on the card at all (Ziggler-Corbin and Crews-Sheamus) did what they needed to do.  And none of the finishes left me scratching my head or wondering why.

So how long does Dean get with the belt?  That’s up to you guys.  Tune in to the show when he’s on, buy some merch of his if you haven’t, and buy some tickets if the Live tour is in your town and he’s scheduled to appear.  Money talks, and it was talking with Roman by way of ratings dropping and flat house show attendance.  I’m not a Roman hater but if he’s not doing box office you move on.  But if you folks want someone else to get a real shot, then you have to support with your money.  If Dean as champ doesn’t improve on ratings or attendance, then Vince is just gonna go with whoever it is he personally prefers.

Speaking of Roman, all of you who’ve made a second career out of conjuring up reasons to hate on him have gotten what you wanted: Roman out of your life for 30 days.  Yes I sound like a Roman apologist right now, I know.  Whatever.  It’s fine to not be a fan of anyone, but some of you guys have turned your disdain damn near into a full time job.  I can’t imagine being so driven as to write a 1,000 word thinkpiece or conjure up a tweetstorm or make a goofy youtube video about why you don’t like a particular wrestler.  I didn’t like Hulk Hogan when I got older because he actually did all the things people accuse John Cena of (never putting people over, burying people).  See, no video or 1,000 words needed.  And what I said is actually true.  But anyhow…

If he violated the policy, then he earned his suspension.  No excuses or further explanation needed.  See you in 30 days.  Now if you want to show that there are guys who you will spend money on, so much that Vince will run with them instead of giving Roman another chance at the top when he gets back, now’s your time.  Spend that money on Dean, Seth, Sami Zayn, whoever.  Don’t show up at RAW and chant ‘CM Punk!’ for crying out loud.  Don’t check out on watching RAW.  If you have the Network, bring up some matches of the people you want to see so that the metrics reflect that.  If not, don’t go crying if Roman gets back and is plugged into the title picture again because Dean, Seth, or whoever wasn’t any better for business.

A common complaint I’ve heard today, before the suspension was announced, was that the company was wasting that Triple Threat match on a nothing happening show like Battleground.  Now while I get that, I don’t totally agree for one reason only:

That match only matters to wrestling fans.

The lost audience share that Vince is trying to recover are not hardcore wrestling fans.  Putting that match on a bigger show won’t amount to a hill of beans for the people Vince is trying to lure back in.  Remember, Vince has famously said more than once that he’s not in the wrestling business he’s in the entertainment business. That’s the primary factor in his decisions to put someone on top.  When I hear people complain about booking, I want to laugh.  That prior era when all the booking was organized, totally coherent, and well thought out for the long term?  It never existed.  Do you know what the current product is really missing?  Let me show you:

Those three guys did more than just bring in a huge crossover audience and make wrestling cool for the masses.  They made you not worry about how the midcard was being booked or who else wasn’t getting the push you thought they deserved.  They made you ignore all the haphazard, hotshot title changes and heel/face turns that were going on around them.  And when you don’t have someone like that around then there’s nothing to focus on except nitpicking every little thing, which is what’s happening now.  The casual fan doesn’t care how many five star matches Sami Zayn and Kevin Owens can have or whether or not Cesaro goes over enough times to look like a credible Intercontinental Champion.  They want to be drawn in by a captivating figure who makes want to tune in every week to see what they do next.  Until the next one shows up to take over from John Cena, then what we get is what we got.  And to be honest, it’s probably the best overall in ring product we’ve gotten ever.  So we should enjoy it until the next big thing comes along and we have to share the room again.