Good opener, with a somewhat surprising result.  The assumption going in for a lot of people was that Owens would win here, the angle wold be over, and Jericho would be off to tour with Fozzy.  Well, I saw on Twitter this weekend that a lot of money was coming in for Jericho at the last minute with the gamblers (that people seek and take action on wrestling events still boggles my mind) so I thought maybe we’d get a different result.  Lo and behold, we did.

Now maybe Owens wins it back Tuesday and sends Jericho off with an injury or Chris somehow finds a way to tour and work part time.  Anyhow, Y2J is probably my favorite all around performer since I came back to wrestling in 1997 so I’m always happy to see him get a W.  And the match was a good one to boot.  Congrats Chris!

Really good match here.  Aries really pulled out his entire repertoire and put it to good use.  Neville continues his nefarious ways to save his title, this time by getting himself disqualified.  This isn’t over yet and I’m all for a third pay per view match between the two.

Another good match, but the story here was the post match full heel turn by the challengers and the beatdown they put on Matt and Jeff.  This was a major star turn kind of beating, one that left Jeff Hardy legit missing a tooth.  Sheamus and Cesaro were also really great in both their pre show sit down interview and their post show RAW talk segment.  Sit down interviews are the wave of the future in my opinion.  So many of the guys and gals on the roster do so much better at them than the standing in the ring monologues.

Another surprise result.  This was easily the best one on one match I’ve seen Alexa in, period.  It was 11 minutes and they got in everything they needed for a really good match, and the lead in to the finish was really well done. I still think Alexa is a better character than wtestler but she has the facial expressions and crowd interactions down cold.  Her getting the win was a bit of a surprise but not a shocker. 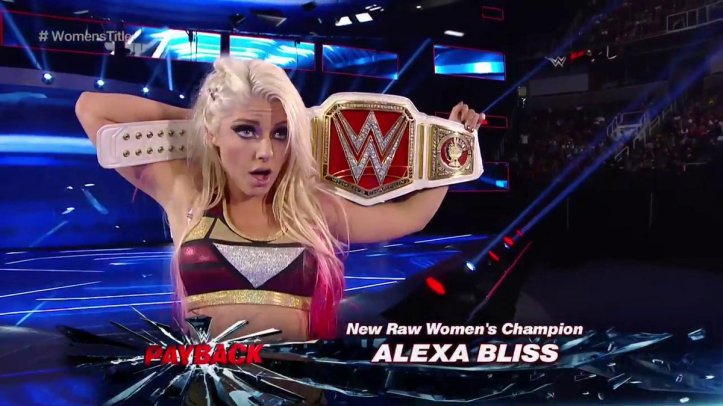 This was strange, cheesy, weird and every other adjective you can throw.  The entire premise was absurd, but sometimes we need a reminder to not take this stuff too seriously.  Having a pretaped first half that was supposed to be at night when it was actually bright and sunny in San Jose is part of the absurdity.  The finish where Jinder Mahal and his guys jumped Randy furthers their angle so all was fine for me.  No you don’t do this regularly but every once in a while a match where a guy gets a refrigerator dumped on him isn’t a bad thing.

The downside to having pre-taped the first 10 minutes or so of the House of Horrors match is that watching it on the big screen sapped the energy out of the crowd, which hurt this match.  It was a good match, though.  I was a little surprised at Rollins winning clean.  We’ll see where that leads.

Perfectly done match, perfect finish. Roman coming out all bandaged up to start with is both more realistic given what Braun did to him a few weeks ago and helps Roman not look weak in losing clean.  Eleven minutes, full throttle from jump, no wasted motion, essentially a longer version of the Goldberg/Lesnar match from WrestleMania.  And that’s exactly how you do these matches, not going for 20 minutes.

One thing important to note was the crowd, which was much closer to 50/50 towards Roman than the ‘Mania crowd or the RAW crowd the night after.  My guess is that the Roman fans decided to not stay quiet; I doubt that he’s converted any of the people who don’t like him.  The same thing happened on the go home RAW the previous Monday.  Another thing was that the average WWE fan really goes for this kind of match more than the smaller guys doing the flippy stuff.  The Strowman vs Big Show matches on RAW got over for the same reasons.  People love King Kong vs Godzilla and David vs Goliath; David vs David not so much.

This show reminded me of TLC 2015 in that a mediocre to bad buildup led into a really good show.  That’s the benefit to having such a talented roster; had this been 1993 or even 1998 this show would have been terrible.  Every match save the taped part of the House of Horrors match was a legit good to great match.  A definite win here and maybe the best RAW only pay per view since the split.