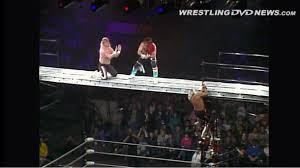 Starrcade 87 was the NWA’s first foray into pay per view, and it didn’t go particularly well on the business side.  Starrcade had become a Thanksgiving tradition for the NWA and was one of the biggest days on the wrestling calendar. second to only WrestleMania.  So of course when pay per view became a thing, NWA promoter Jim Crockett wanted to get a piece of the action.  Which prompted a full on assault from Vince McMahon and the WWE (then WWF).

It wasn’t pretty; Vince created his own Thanksgiving event, the Survivor Series, and used his existing relationship with cable companies to force their hands and choose between carrying his show and Starrcade.  He won big, too.  Given the choice between someone who’d already made them money and a newcomer the cable companies went with what they knew.  And that was too bad, because in the ring Starrcade was a better show.  Which is why I’m talking about that here and not Survivor Series.  So here we go, 27-plus years in the making, my Starrcade 87 preview:

Each time had a duo that had worked together pretty frequently: Hayes and Garvin for the face team, Gilbert and Steiner for the heels.  Sting had been part of a heel trio with Gilbert and Steiner and was a tag team champion with Steiner.  Zbysko was new to the company after having been pilfered from the AWA.   The crowd was really hot for this, and the reaction Sting got was an obvious foreshadowing of what would come for him later.  There was good back and forth action from both sides throughout.  The match went to a fifteen minute draw; that’s unheard of now but was pretty common for show openers back then.  We got our first look at a Stinger splash immediately after the bell.  Good way to open the show.  Fun fact: a little over a year later both the Hayes/Garvin and Gilbert/Steiner duos would win tag team gold.  Zbysko would have a pretty unevenful NWA run and would go back to the AWA a little over a year later.

One subplot at play was the last hurrah of the UWF which had been bought by Crockett a few months prior.  This may have been the last UWF title match on record, as the title was retired shortly afterward while the UWF roster was folded into Crockett’s.  This was easily the worst match on the show.  This was a rare face vs face match which was supposed to serve as the start off point for a Williams heel turn that was quickly shelved.  Ironically Windham would make a heel turn himself within a few months.  About two minutes in Williams catches an inadvertent low blow, and Windham allows him to recover.  When Windham bangs his head on the announcers table a few minutes later Williams promptly takes advantage and pins him.  A less than 10 minute match from these two was a disappointment to start with, but that finish…..yikes.  No thanks.

These two teams had some great matches over the years, and this was the last one that mattered.  A scaffold match might be the most ridiculous match ever created.  Two teams fighting on top of a scaffold and the only way to win is to knock both members of the other team off of it.  Yeah…it sounds real crazy.  The crowd was super hot for this one as it was for any match between these two teams.  Scaffold matches didn’t offer much in terms of workrate; they were basic brawls with some cheating thrown in by the heels.  What made the good ones work were the crowd’s affection (or disdain) for the competitors and the oohs and ahhs that come with each time someone almost gets thrown off.  That was all in place here, and Jim Cornette earned his money getting the crowd incensed at his cheating tactics to help him team.  The match was good for what it was and the crowd made it better.

Television titles were a staple of every company outside of the WWF/E.  The idea was that you have a champion whose job it was to have good title matches on television against decent opponents, as a contrast to the star vs jobber matches that filled the rest of the show.  With the UWF being folded into the NWA, and Nikita needing a match, the storyline wrote itself.  Taylor had been a standard good guy who was a poor man’s Ric Flair in the ring skill-wise before turning heel in the summer of 1987.  The match was very good, pitting Nikita’s power moveset against Taylor’s technical skills, cowardly heel ways, and interference from manger/partner Eddie Gilbert.  Taylor ran a lot of the Ric Flair playbook minus the over the top theatrics and was a perfect foil for Koloff.  Gilbert’s well timed interference set up the finish, where it finally backfired and enabled to hit his Russian Sickle for the win.

This was pretty much a tag team version of the Taylor-Koloff match.  Both teams used the same gameplans and were every bit as effective as in the previous match.  It’s a shame these two teams didn’t work together more, because this match was a lot of fun to watch.  Blanchard and Anderson were primarily occupied with the Rock n Roll Express or some combination of Dusty Rhodes and his allies, while the Road Warriors were usually facing some evil facsimile of themselves (the Russians or the Powers of Pain), the Midnight Express, or were teaming with Rhodes in six or eight man tag team matches.  The only problem with this match was the finish.  You’re in Chicago, the Road Warriors hometown, and you do a Dusty finish?  Come on.  Either have the Warriors win the titles or get a win by disqualification.  Not a faux victory overturned into a DQ victory for the champs.

This match was Dusty’s last hurrah as a title winner; his victory here would be the last title he held in a major company.  The match was a pretty good one.  Luger was still finding his way around the ring and needed a veteran like Rhodes to lead him through.  In one spot, Luger botched an attempt at his Human Torture Rack finisher and had to sit Dusty in the corner to keep from dropping him.  The finish was an callback to how Luger won the title by using a chair that J.J. Dillon threw over the cage wall while the referee was down.  The entire sequence was rerun except that Rhodes caught him while he reaching down for it and DDT’ed  him on it to get the victory.  This match also laid the early groundwork for Luger’s face turn that would come a few weeks later.  Rhodes job was ultimately to get Luger ready to move up to face the Horsemen and Flair the next year and he succeeded here.

This was relatively short for a Flair main event, as it was under twenty minutes long.  But they made up for the brevity with intensity.  These two beat the hell out of each other for about 17 minutes and it was lovely.  Flair ditched the coward heel act and a lot of the theatrics and just went at it with Garvin, trading chops and slaps that sounded like they hurt real bad.  Garvin is one of the forgotten men of the mid 80s NWA period but was really good at what he did.  Flair got busted open, which was pretty common back then but just doesn’t happen now.  Flair got the win to regain the title after slingshotting Garvin headfirst into the cage.

All in all this was a great show.  The NWA had a style that was a complete contrast to 80s WWF and was, in the minds of most fans, a superior product for many years.  But Vince had the hype machine and the relationships with the media to relegate them to a well known but distant second.  This show was as good as anything they put on and beat damn near anything the WWF had put on up to that point.

If you want some more, I storified some tweets as I watched Starrcade 87.