There isn’t a week that goes by without Wrestling Twitter going on about RAW’s ratings and how they’re in the crapper.  And every now and then even some personalities like Vince Russo or random bloggers (of which I am one, of course) chiming in.  If you go by what they say, you’d be pretty concerned if you were Vince McMahon.  But are these people really telling the truth or just spinning half truths, bolstered by anecdotal evidence, to get themselves some attention?  After all, one of the easiest ways to get attention on Wrestling Twitter be it for likes/retweets or for your blog or podcast is trash WWE.  The WWE name gets eyeballs and negativity always moves the needle.  Throw in some takes that are already out there among so called smart fans about Roman Reigns or Jinder Mahal and boom!  Listen to those clicks and see those shares!  Profit!  If you haven’t guessed already I’m going to take the contrary position to those takes.  In short, here’s the deal:

Don’t believe a bunch of disingenuous arguments about TV ratings.

What are these arguments?  Here they go:

The ratings are lower!!!

Yes, the Nielsen ratings and total viewership for RAW is lower than it was before.  No arguing with that.  But what exactly does that even mean?  It doesn’t mean that a lot fewer people are actually watching RAW.  What it means is that a lower number of people who have Nielsen boxes in their homes are watching RAW when it airs live on USA Network Monday nights.  Do you have a Nielsen box in your house?  I don’t.  My RAW viewing habits don’t matter one bit and if you don’t have a box in your house, yours don’t either.  It doesn’t matter how many ‘I quit RAW two years ago!’ tweets you fire off and many likes they get, you don’t figure into the equation.  Fewer people with Nielsen boxes in their homes watch RAW when it airs live Monday nights.  But the same is true for pretty much everything that airs on network TV and basic cable.  Look at this story from Hollywood Reporter (special thanks to @Heeltown for sharing the link); the season debuts for everything were down 10 to 50 percent from last year. Even the almighty NFL isn’t immune any more.

And we haven’t even gotten to the other part of this: alternate viewing options.  I watch RAW on DVR every week, and so do a lot of other people (including those with Nielsen boxes).  Lots of other people watch the Hulu version of the broadcast, or watch clips on YouTube.  People are ditching cable left and right and that’s going to cut into TV ratings for everything.  You think RAW is immune from that?   In reality the smart TV people are figuring out to incorporate every form of viewership into how they assess the performance of their respective channels’ shows.  Live, live plus five, and live plus seven are all measured for ratings.  Shows like Agents of SHIELD have survived off of DVR numbers.  And despite all of that RAW is still the highest rated show on USA network by far and is always one of the highest rated shows on basic cable.  Ratings wise they’re in no more trouble than anyone else.

But there are a few other phony arguments out there that you need to really disregard when you see them.  Such as:

I’ve seen Vince Russo float this one before.  What’s fraudulent about it?  Vince is comparing the rating for one episode, the highest rated episode in the show’s history, to whatever recent episode has a low enough number to suit his purpose.  But there was never a time when RAW routinely got 8 million viewers, or else it would have been on one of the big four networks and not basic cable.  That one episode was an outlier.  That’s like taking Wilt Chamberlain’s 100 point game and comparing it to his scoring average later in his career with the Lakers.  You can’t have a more apples and oranges kind of thing.

The key word here is ‘wrestling’.  Yes, the audience for wrestling was over 10 million people back in 1998.  But half of those people were watching WCW Nitro, and a lot of them went away once WCW went in the crapper.  A lot of WCW fans were not here for WWF/E, and never came back once their preferred option went down then went away.  If Coke bought Pepsi and shut down most of the Pepsi products all the lifelong Pepsi drinkers wouldn’t become Coke drinkers.  Some would but a lot of them would just find another soda or stop drinking soda altogether.  Right now TNA has a dedicated audience of a couple hundred thousand fans; they watch no matter state the company is in or whatever the rest of us say about it.  If TNA folded the ones who don’t already watch RAW wouldn’t all become WWE fans.  Some people like a brand and not a product as a whole.  For example I’m a Star Wars fan way more than I am a general science fiction fan.  If Star Wars went away I wouldn’t run to every other movie that took place in outer space.

RAW has been on a decline for the last 15 years!

What happened 15 years ago?  Namely, a couple of guys went scarce.  These guys: 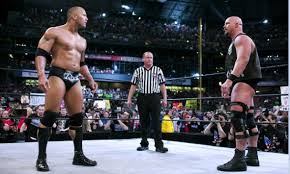 Two of the biggest names and biggest draws in wrestling history began to scale back their involvement.  Both Rock and Austin went part time in 2002, then Austin retired in 2003 and Rock became a sporadic performer.  The high ratings of the Attitude Era were built on the backs of these two men and no one was going to match that.  Those two were such a big deal that whole lot of crap from that era got glossed over and accepted because of the gold that they spun.  The entire show would be booked around them, from long promo segments to backstage vignettes to the main event of the show every week.  Nowadays one in ring segment and a match from Roman Reigns is labeled ‘shoving him down our throats’.  So imagine having not one but two guys you could book a whole show around and get record ratings, and then both of them leaving at the same time.  Yes, your ratings are going to fall.  Go check the historical TV ratings for RAW and you’ll see when the biggest hit came.  You add in the natural erosion in TV ratings across the board and I think you have your ratings problem all figured out.

So don’t believe the hype.  WWE is about where it should be.  Wrestling is a niche product that occasionally breaks out into mainstream popularity.  I’m sure that they wished John Cena became the well known crossover personality that he is today about seven or eight years ago, but beyond that I don’t think Vince is sweating like you think.

One thought on “Ratings? What ratings?”