Wacky Ideas for 2018 and Beyond

The WWE found itself in an interesting place last year. The roster is as loaded as it’s ever been, and the in ring action remained consistently the best it’s been for a while. But some competitors really stepped their games up, particularly New Japan, so there was no advantage gained. In fact, good wrestling is so abundant across the board now that you don’t get points for putting any on, you just get compared to everyone else. Which means you need to switch things up somr kinda way.

2018 is in full swing and the Royal Rumble is almost here as of this writing. Then it will be time to head towards WrestleMania 34. But what about after that? What kind of things should WWE do to keep things interesting throughout the rest of the year? In 2017 we had the first Women’s Money in the Bank match, the Mae Young Classic, and the Braun Strowman adventures. In 2016 we had the Cruiserweight Classic, the brand split, and the return of Goldberg. So what now?

It was mentioned on the WWE website, so they’re thinking about it. The women’s division is ten deep on each brand, and with only one title for each show you have anywhere from five to eight women every week in need of something to do. And rather that conjure up nothing but boyfriend/girlfriend angles and catfighting situations, give the rest of the ladies something to fight over. We’ve already got some ready made duos (Sasha & Bayley, Charlotte & Becky, The Bellas if they come back) and a certain Iconic Duo in NXT that’s ready to move up. This also helps with the problem of what to do with Sasha or Charlotte or even Alexa when it’s to give some else a turn with the women’s singles title. And you can have one title defended across brands, including NXT. What better way to get the ladies more TV time? This also gives you a title that can be defended on TV regularly, so you don’t have to have Intercontinental or US title matches every week that we know aren’t going to result in a title change. And speaking of tag teams…..

Why the hell not? The Mixed Match Challenge should be more than a one off event to get Facebook views. Keep some of the teams that are obvious fits (Charlotte and Roode, Naomi and Jimmy Uso) and tweak the other ones that don’t fit together as well (swap Dana Brooke with Nia since she and Apollo are both part of Titus Worldwide). Again, it gives people something to fight over when they’re not in a singles title picture. More titles is not a bad thing if they all mean something. This would be a great way to get in on the intergender matches that run in the indies but without subjecting the WWE family audience to Braun Strowman powerslamming Bayley or Nakamura kicking Charlotte in the face. Like with the Women’s Tag Title you can defend these across brands. Like the Women’s Tag Titles it gives people something to fight over without creating yet another Men’s or Women’s singles title that feels like nothing more than a prop.

All Women’s Pay Per Views

Every month the ladies get squeezed for space on the pay per view shows. There’s always one match, which it usually a Women’s Title match for that brand, and maybe another match on the pre-show. And then on the joint shows you get two women’s title matches and then maybe a preshow match. WrestleMania followed that trend last year by shoving as many women as possible into two matches. Why not give the ladies at least one women only pay per view a year, or even one every season? Make it across all brands, and you can get your title matches for each brand, a women’s tag team title match, and a match for each brand that can be built to on the separate shows. Instead of a dud of a show like Battleground was in 2017, why not give the ladies a night instead? And it gives you room to let the ladies have longer matches because they’re who everyone came to see that night. Now you can have a 15 minute match to settle a feud instead of a six minute get-in-and-get-out affair. You also get a chance to showcase some NXT talent on a bigger show, which in turn gives them some name recognition when they get called up. 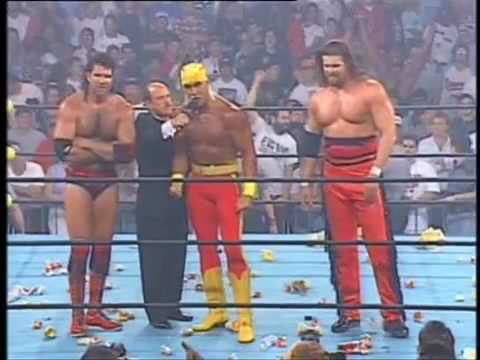 OK, this is a direct rip off of New Japan. So was the NWO. Everybody doesn’t have to be in one but it gives otherwise uninteresting guys and gals something to be a part of, and some meaning to their fights. We already have The Shield, Balor Club, Titus Worldwide, The Riott Squad, Sanity, and The Undisputed Era so the groundwork is already there. Just build on it by setting off faction beefs and now more matches have stakes than before. Maybe sprinkle in some the cruiser guys to get them involved more. What’s to lose here? More guys with a purpose is a good thing. Whether or not this would be a cross brand thing, I’m not sure. That could make things really messy. But it’s worth a shot if you ask me. Just don’t let them get out of hand and know when it’s time to switch up members and it will be fine.

OK, those are just a few ideas I had swirling around in my head or was given through twitter conversations. The key here is for them to do some things that either aren’t being done elsewhere or aren’t being done like they can do it. There’s plenty of good to great wrestling to go around, so much that even a great WWE night of matches doesn’t stand out for the ring work. So it’s time to distinguish yourself from the competition and think outside the box. What’s the worst that can happen?