Black Panther is the latest entry in the Marvel Cinematic Universe (MCU), and the last movie before Infinity War comes out this May. But like Wonder Woman last year it bears a special significance above and beyond just being a cool movie we wanted to see. It’s not the first superhero movie with a Black lead character (In fairly recent years we have had Blade and Hancock, and if you want to include comedies there’s been Blankman, Meteor Man, and Steel) and it’s not the first to have a predominately Black cast (that would be Meteor Man if you’re counting it) but it’s the first to have both and get major studio backing from a budgetary and marketing standpoint. And it has some unprecedented levels of inclusion behind the camera as well.

Black Panther has a black director in Ryan Coogler, black writers (Coogler and Joe Robert Cole), a black costume designer (Ruth Carter) and numerous other Black people throughout the crew. That and the studio support are as big a deal, if not bigger, than the actual cast and story itself in that it represents a radical departure in how Hollywood blockbusters are staffed, and how movies with predominately Black casts are handled by major studios. Why does that matter? Because opportunities for some breed opportunities for others. A little over 30 years ago Eddie Murphy was giving breaks to Chris Rock, the Wayans family, Robert Townsend and Aresnio Hall. Over the last 10 years Tyler Perry has given major screen time to Tajari P. Henson, Idris Elba, Kimberly Elise and several other Black actors and actresses who would parlay those roles into future work. Coogler is picking up that baton and carrying it forward.

But none of that matters if the movie isn’t any good, or fails at the box office. Well if you’ve read the news lately you know that neither one of those is the case. Before I get into details I’ll go ahead and say that yeah, this is a good one and worth your money. Just how good is it? I’ll get to my answer on that in a minute. But first, a little of the setup here. The movie takes place a week after Captain America: Civil War. T’Challa is mourning the death of his father T’Chaka and is poised to take his place as king of Wakanda (whoa….almost typed Zamunda there), a fictional African country that is technologically advanced far beyond the rest of the world, has never been colonized, and exists in isolation from the rest of the world while putting up a front that they are an impoverished third world country. And while that’s going on Eric Killmonger, T’Challa’s cousin who was orphaned and abandoned in America when T’Chaka killed his father, is plotting his way into the country to take revenge and the throne for himself.

And now on to the review…..

The supporting cast was chock full of interesting and exciting characters. Okoye, general of Wakanda’s elite defense force the Dora Milaje, shines every time she’s on screen and has the best fight moves of anyone in the film. Shuri, T’Challa’s sister and chief scientist, was perfect as the younger sibling who refused to let her older brother’s head get too big. Nakia, T’Challa’s on again/off again love interest, was the conscience of the movie as Wakanda’s rulers wrestled over how to deal with the outside world. T’Challa himself was played in a more understated fashion here, and that could have hurt the film but it allowed everyone else to shine and bring up the whole movie in the process.

And that’s just the good guys. M’Baku, head of the splinter Jubari tribe, stole every scene he was in. Ulysses Klawe made for a great secondary villain, both menacing and funny at different points. And then there’s Erik Killmonger, only one of the besr villains the MCU has produced. Killmonger had real emotion, a legit reason to be pissed off, had the villainous aura to him, was a physical threat to the hero, and got off some great lines. Everything you want from a superhero movie villain. Michael B. Jordan took that role to a level beyond most superhero movie villains with his performance.  Where exactly he ranks is a matter of opinion but he’s really high on most people’s lists. 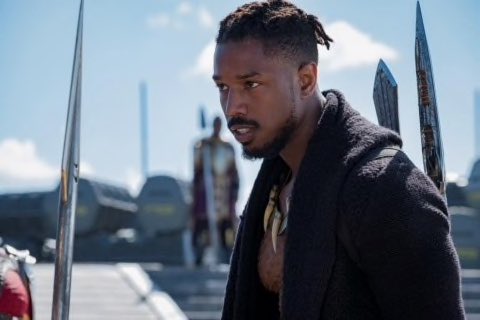 The visuals were absolutely stunning from the shots of Wakanda’s advanced cities to the city in South Korea where T’Challa was chasing down Klawe to the Wakandan waterfalls. Ruth Carter’s costumes were superb as well, bringing a real authenticity to both ceremonial and combat gear thanks to the real life African attire that influenced her. And the dialogue was the right amount of serious without getting pretentious or self aggrandizing. The debates among the various characters over how Wakanda should deal with the rest of the world were spirited but not so much that they overshadowed all the superhero stuff that we came to see. You don’t need to get bogged down in Star Wars prequel style political drudgery to ask serious questions about the government depicted in the movie.

T’Challas fight scenes were just ok. It didn’t matter as much here because of what we got from the Dora Milaje, M’Baku, and Killmonger but after the way he showed out in Captain America: Civil War it was a bit of a letdown here. Also, the run up to the initial confrontation between T’Challa and Killmonger didn’t really work for me. It needed some fleshing out to better explain why so many people were ready to consider Killmonger’s ideas, even as they looked beyond suspect in both his motives and their chances for success.

Also, this is not a personal dislike but if you fashion yourself a CGI authority then don’t hold back here what you’ve let loose on other movies, because this movie is guilty of it too. I’m not Mr. Harp on CGI so I’m not going to do it here but I’ve seen enough of you go all caps on the CGI in other movies that wasn’t any worse than what we got here, so just be consistent about it.  I overhead kids talking about the CGI on the way out of the theater so if they can notice it, but you’re conveniently leaving it alone, you’re playing yourself.

You can’t make light of the cultural impact of this film. The sheer joy that so many people took in going to see it opening weekend, punctuated by the number of people who dressed in African garb and even some of the clothes worn in Coming to America, like these guys here:

It was truly a sight to see just as it was for Wonder Woman last year. We’re going to be talking about this movie for a long time.

The big question of the movie, how to manage and adapt the structures and institutions that undergird and maintain any successful society, is especially poignant in 2018.  We’re at a point where faith in so many of our institutions here is not very high, and there exist many people who would like to burn them all down and start over like Killmonger along with those who want to redeem and reform what we have and set it on a new, better course for the future.  T’Challa, Nakia, and Killmonger all represent different sides in that struggle as do the people of Wakanda who are ultimately presented with a major dilemma once Killmonger shows up to try and force a new direction for the nation.

Really good movie. I’m not going to grade it, because I am admittedly compromised here. But I highly recommend it to anyone who may be interested, and it’s worth the repeat viewings it’s getting. Kudos to all the cast and crew for making this thing happen, and to all the ticket buyers who have made it such the success that it has been.