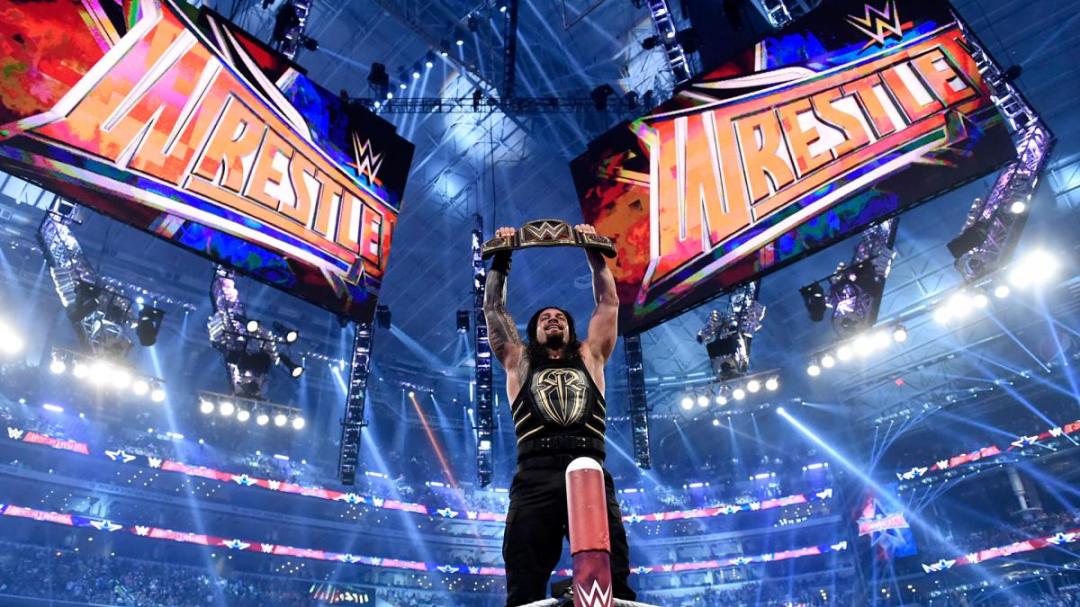 The weeping and gnashing of teeth over Roman Reigns winning the Elimination Chamber match and getting a fourth straight WrestleMania main event is in full effect now. But rather that fight people on the internet over it, I have a simple question. Which WrestleMania main event would you have taken Roman out of? I’m running a poll on my Twitter page right now (rbonne1) to see what people think. But while that’s happening I can look at each one more in depth and see if I think it would have actually made sense to do so. And by the way, if you’re on the ‘four in a row is just too many’ train, I suggest you go talk to this guy: 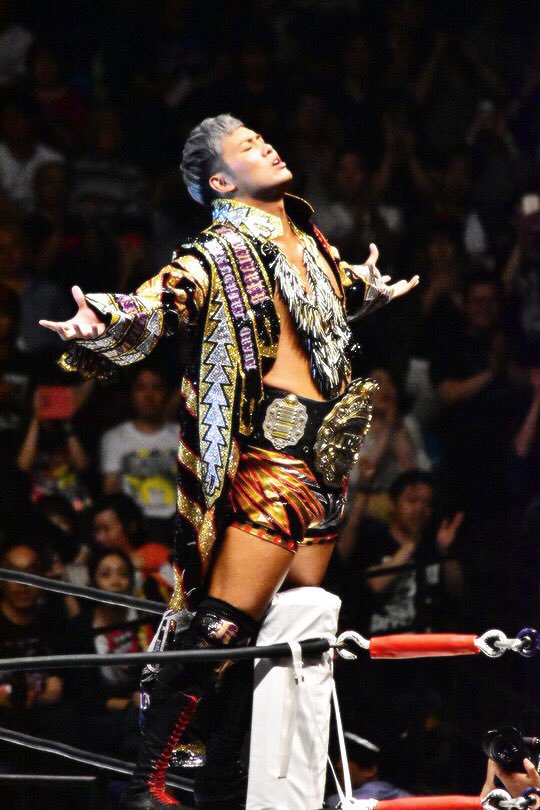 For those who don’t know that’s Kazuchika Okada, the IWGP Heavyweight Champion, and participant in the last six main events of New Japan Wrestling’s biggest show of the year, Wrestle Kingdom. Not only has Okada main evented six in a row but the last two years he beat guys, Kenny Omega and Tetsuya Naito, who a lot of people thought should have taken the title. So please, just be consistent here. Don’t tell me one is an outrage and shrug your shoulders at the other. But anyhow, on to these WrestleMania main events:

The match: Roman vs The Undertaker. Taker was well past his prime, and could barely get around here. It looked more like a mercy killing than a wrestling match.

The outrage: First it was ‘why are they gonna sacrifice Taker to Roman?’ Then as word got out that it was likely the end of the road for Taker, it became ‘how dare they have him go out in his last match to Roman freaking Reigns!’

The reality: Given that Taker could work with whoever the hell wanted and could refuse if he wasn’t feeling it it’s pretty clear that either: a) he asked for Roman or b) he was pitched and said ok. Either way the man chose to work with Roman, so why are you mad? If you believe he had the right to call his shot then shouldn’t you be ok with the one he calls? Well of course you aren’t ok with it, the same as you weren’t ok with him choosing to let Brock Lesnar end the streak. We all love to give other people freedom of choice, right up until they make a choice we don’t want.

The alternative: If Taker didn’t ask for Roman then you could have put Cena in there instead. That was supposed to be the match at ‘Mania 32 before John got hurt. What would you have done with Roman, then? If you can’t come up with a match befitting of someone at his level in the company then we can end this part now. And if Taker did ask for Roman, then there was no way around it so suck on it and like it. 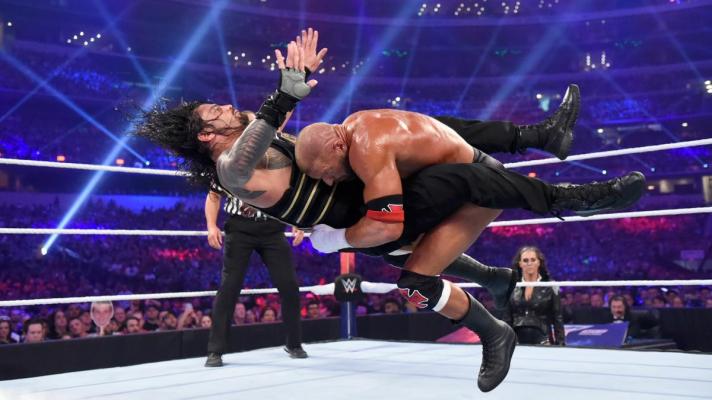 The Match: Roman vs Triple H for the WWE World Title. Match goes too long, another HHH ‘let’s go 10 more minutes than we should so it will be EPIC!’ special.

The outrage: Ugghhh……Roman again……why can’t Vince see that we (‘we’ being people on social media who like to bitch and moan about everything, who think they represent the entire fanbase when they don’t) don’t want Roman as the main guy?

The reality: HHH was supposed to face Seth Rollins on this card, reportedly in the main event, but Rollins blew out his knee and couldn’t go, and a lot of other guys were hurt too (Cena, Randy Orton, Cesaro) so they had to make due as best as they could.

The alternative: Dean Ambrose was red hot at the time, getting the full face reaction that is desired for Roman, but got relegated to facing Lesnar in match that looked promising on paper before Brock took the ring in full Mail it in Brock mode, which we all know is death. Swapping Ambrose and Roman could have probably resulted in a better effort from Brock and a main event that didn’t have a vocal bunch of whiners rending their garments afterwards. But what next? We’ve seen how quickly a Dean Ambrose title victory turns into a meh Dean Ambrose title reign. Dean and Roman both had title matches with AJ Styles that year and we all know who’s matches were better. 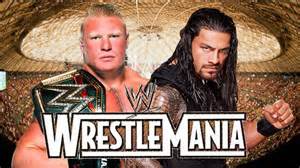 The match: Roman vs Brock for the WWE World Title. One of the better main events in recent years, punctuated by Seth Rollins cashing in his Money in the Bank briefcase to walk away with the title.

The outrage: A lot of people were pissed that Roman won the Royal Rumble instead of the returning Daniel Bryan. Up until that point you can listen to the crowds on WWE shows and see that no one had any beef with Roman. Everyone knew he was going to be getting a big push and we were all cool with it until Bryan came back. (Don’t come at me with your revisionist history bs either; lying to me is bad but lying to yourself is worse.) Once Bryan came back his most vocal fans, of which to be fair are quite many, wanted him to get the chance to have the lengthy run as champ that he was denied when he got hurt shortly after Mania 30. When word got out that it wasn’t going to happen, then the knives came out for whoever Vince picked instead.

The reality: If you run a major wrestling company no way do you put your faith in Bryan, coming off injury mind you, to stay healthy given his reckless ring style and the years he had put in killing himself both in WWE and before he got there. Maybe you don’t choose to go with Roman given all the WWE has to work with, but if you had to choose between the two it’s a no brainer. If you think otherwise, well there’s a reason Vince owns the company and you’re tweeting about it. And real talk if Bryan hadn’t gotten hurt in 2014 he was just gonna be the food for Brock that Cena was in his place at Summerslam that year, and Roman would have been in the main event at 31 anyway.

The alternative: They could have kept Bryan out until after WrestleMania, so as not to dangle the carrot in front of his fans only to snatch it away. But beyond that, then what? Bryan challenges Roman at Summerslam, but you still have the same problem where Vince doesn’t want to hitch his wagon to a health risk. The other option was to have him win the Rumble and go to the main event of WresteMania 31 instead of Roman. But then what? Bryan beating Brock wasn’t going to happen; Seth cashing in the briefcase then going on to face Bryan at Summerslam is a possibility if Bryan doesn’t get concussed like he did a few weeks later. What happens with Roman while all this is going on? Do you really stick him in midcard I-C title feuds for a year? Is there ever a time so long as Bryan is around and able that his fans will be willing to let Roman get a shot at the top spot? I doubt it, and therein lies the conundrum. Sooner or later if you’re Vince you would have to go through this storm.

As of right now, WrestleMania 32 is winning the poll. Of the three that seems to be the easiest one to escape from without causing more problems. If I had to pick one I’d go with that one; the match against Brock at 31 was too good to make disappear and there wasn’t anyone who could make 33 against Taker any better than it was. But even with that I still have to say: why y’all so mad? Does one match on a show that’s gonna run well over four hours really hold that much sway over you that you’ll consider the whole show a failure? Did you count up main events for anyone else? Are you still upset that it’s him and not someone else, even though every time you get the chance to boost someone else you opt to toss a beach ball around or sit on your hands?

I’m old enough to remember when a past his prime Hulk Hogan was booked to bogart the main event at WrestleMania 9 and win the title in a few seconds, completely undercutting both Yokozuna and Bret Hart, and then bailing before giving the match he’d reportedly agreed to. And when Shawn Michaels walked out before he was supposed to return the favor that Bret did for him at Mania 12, leaving us with Undertaker vs Psycho Sid instead. Both of those are way more outrageous than Roman Reigns getting four in a row. Get over yourselves already. So long as he’s in the position he’s in, and ranking where he is as far as merchandise sales and what not then he’s going to be in the mix for the main event. Would it hurt to mix it up next year? Of course not. But some of y’all want him gone altogether and that dog ain’t gonna hunt.