Ring of Honor Best in the World Recap

In an effort to become a more well rounded wrestling fan I started watching Ring of Honor a few months ago, and when I found out they were holding a pay per view event within driving distance I figured why not take a look at how their bigger shows play. To be honest I was not going to order this show on pay per view had it not been so close to me; four years of paying 10 bucks a month for the WWE Network has spoiled me. And in this case the ticket was around the same price as pay per view anyway.

Ring of Honor has a six man tag team championship (as does New Japan), a nice spin to put on your tag team division. The Kingdom are ROH regulars while LIJ is five man faction from New Japan. The three LIJ guys in this match were Bushi, Evil, and Sanada. The downside to these kind of matchups is that you know the guys who aren’t regulars probably aren’t going to be winning the titles so most of the suspense to the match is gone, leaving you with what is essentially an exhibition match. That being said, we got a decent opener here. Nothing spectacular but well worked with some decent work from everyone. As expected, the Kingdom wins to retain the titles.

For those who don’t know, Bully Ray is Bubba Ray Dudley of the Dudley Boyz. Flip Gordon is one of Ring of Honor’s young up and comers who also has done some lucha stuff with CMLL and in the Best of Super Juniors Tournament in New Japan. The story here was that Bully Ray is the pissed off older guy mad at all the young whippersnappers in the business, and Flip is the latest object of his ire. Bully attacked him a few weeks before the show, and here we are. 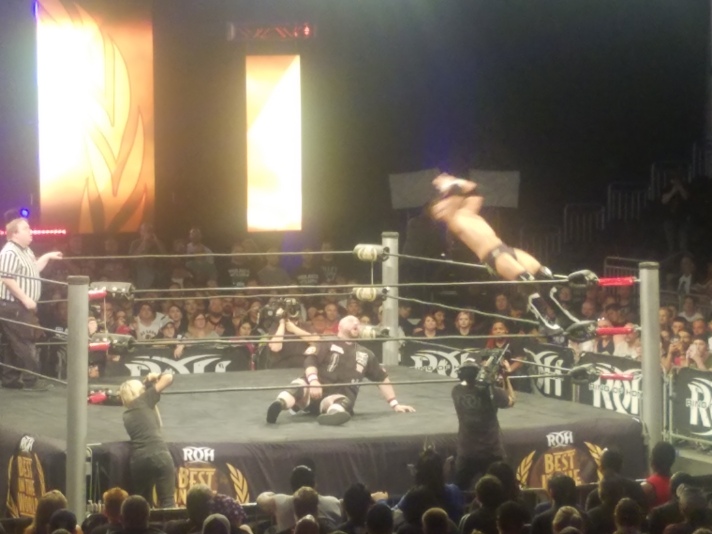 Flip started off hot with some athletic high flying stuff that lives up to his name. Then Bully got control, Flip came back, then Bully got himself DQ’ed with a low blow. Afterwards we get a nice ECW style beatdown on Flip and two other guys who came out to help him before Colt Cabana comes out from the broadcast booth to ward him off. Not sure what we’re leading up to here. An old guy vs old guy match between Bully Ray and Cabana? I guess. This is the kind of thing that would launch a thousand internet complaints were it happening in WWE. I have no idea why I typed so much for a five minute match. Anyhow…….

This was an eight woman tag team match. ROH has a newly minted women’s division with Sakai as it’s champion, but this is the first time that the women’s division made it on the main show of a pay per view show. And instead of a title match to showcase their champion we get this. This was reminiscent of when the WWE would throw all their women into a 10 woman tag match and give them 5 minutes on a pay per view or 2 minutes on RAW. They got 10 minutes here so that’s good, and the match was ok but not much to remember beyond the night of the show. The way they present their women’s division leaves a lot to be desired. They barely mention them on their weekly TV show, to the point where I had no idea who the champion even was. And then they trot out veterans like Dashwood (Emma from WWE) without any real purpose. Is she going to challenge Sakai at some point? No idea because they don’t say a whole lot to fill you in on it. The WWE women’s division deserves plenty of the criticism it gets but it is far ahead of what ROH is doing.

Aries and King were once friends but after King’s attempt to help Aries win the ROH TV title went awry Aries turned on him and attacked him. King, always, the Robin to Aries’ Batman, saw this as a chance to prove they were equals. I never got why exactly Aries went with a full turn and didn’t just get pissed off in the moment, but that’s neither here nor there right now. The match had it’s moments, but it was mostly a spot trading contest. The crowd was mostly cheering Aries even though he was working heel, largely because he’s the far more well known of the two. Aries would ultimately win it clean, which makes no sense to me. Either King should have won or Aries should have had to cheat to win. The point was to show that King was as good a competitor as Aries but instead we saw that King was as good at doing some individual spots but not enough to win.

One of the best two matches of the night. Lethal has been great for a while and is one of the best guys to have not worked in WWE and Kushida is one of the best Jr. Heavyweights in New Japan. The story here is that Lethal has been working his way back up the ladder to get a shot at the ROH World Title again, and has been avenging losses that he’d taken over the past several months. That’s pretty much all the story you needed, because these two went there and killed it. The only knock I had is that this is another match where you had a ROH regular in Lethal against a guy from NJPW so the result wasn’t in much doubt from jump. But they did a good enough job that it ultimately wasn’t a big deal. This match and the tag title match later were worth the ticket price alone.

First match of the night for the Bullet Club. Page is really good, Martinez…….meh. This was a Baltimore Street Fight so anything was allowed. We got tables, chairs, and thumbtacks involved. Page was carrying the load here in a big way as this was a basic garbage match like we used to get during the Attitude Era. The finish was really disjointed as Page dumped Martinez on a pile of thumbtacks but then two seconds later he got slammed through a table and pinned by Martinez. Oh well, makes sense to somebody.

The other match of the night. If you had any question who the most popular guys in the company are, the response the Bucks got answered that really quickly. As much as I complain on twitter about how they don’t sell some stuff to my liking, I do like most of what the Bucks do. They’re excellent athletes and they have a lot of innovative double team moves that they pull out during their matches. I was also really impressed by the Briscoes.

Both teams are really good and put on a great match here. Did the Bucks piss me off? But of course. One of them took a piledriver on a chair and kicked out of the pin…..why, why, WHY? There’s no need to even bother with a spot like that if it isn’t going to end the match or at least seriously slow the man down. Other than that no complaints here. Great stuff by everyone involved. The Briscoes retaining surprised me a bit based on how the story was going leading in, but they’re really good so it’s all good.

Note: A few people started leaving after the tag title match was over. As big of a deal as Bullet Club has become, the Bucks are clearly the stars of the group. They’re the most exciting and the easiest to enjoy in the ring.

We end a with a battle of three guys who do great character work. Scurrl was way over here, the most of the three. After the tag title match this was a bit of a letdown. Castle was clearly working hurt, as he picked his spots and spent a good bit of time recovering on the floor. Cody, for all the great character work he’s been putting in is still just Cody Rhodes from WWE once the bell rings. Rhodes was accompanied by his wife Brandi while Castle had his two valets The Boys with him. 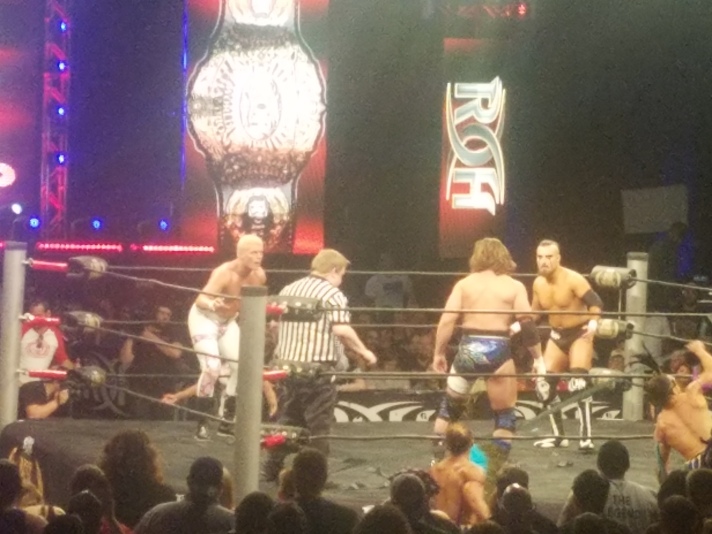 All three got involved throughout until the referee sent them to the back. Then NWA champion Nick Aldis, who Cody has challenged to a match for the NWA World Title, came out to mess with Cody. The whole thing was a bit overbooked and Aldis coming out made no sense to anyone watching that didn’t already know the deal. Castle would win to retain, which was a shocker because the money was all on Cody winning to set up a title vs title against Aldis at All In on September 1.

Two great matches, and a bunch of stuff that ranged from so so to good. The booking decisions in a some places really puzzled me and the inclusion of New Japan guys and Stardom ladies, while improving the wrestling, took away a lot of the suspense. Bullet Club went 0 for 3 in title matches, and while I didn’t expect them to win all three I figured somebody would get a title. And then the next night at the TV taping (SPOILER ALERT) there was a 4 way World Title match won by Jay Lethal……WTF man? Short circuiting Lethal’s redemption story and pulling a Vince Russo with the title change the night after a pay per view all at once, what are y’all doing? And if Lethal ends up being a placeholder to drop it to Cody before All In, why not just have Cody win at the pay per view? I don’t know man. As far as this show, it was fine for a night out if your circumstances were like mine (living a few minutes away and the tickets not costing too much). Going by the way I judge WWE pay per views I would call this one a good enough watch if you had the network but not something I’d dish out pay per view money for or travel to see live.

One thought on “Ring of Honor Best in the World Recap”