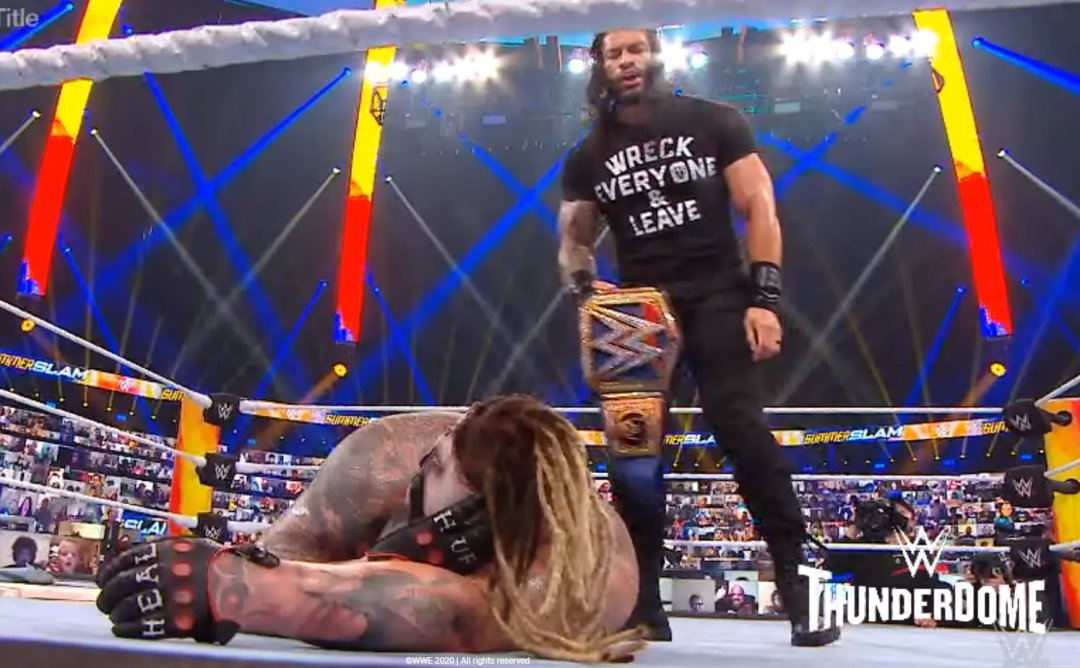 Five years ago I wrote about the desire from a lot of people to turn Roman Reigns heel and why I thought that was a dumb idea. And since then it’s gotten consistent traffic every year even though I don’t even promote it anymore until I tweeted it back out today. Now that is probably because Roman is a traffic generator unto himself (if this site ever makes me any money I owe him a cut, it’s that significant) and because the topic has never gone away. It’s been as easy hot take for clicks to say that they should turn him heel or wonder if this latest act from him is a heel turn? The latter is particularly exhausting to see because said acts usually involve him not being a punk or choosing to strike first against an enemy, either alone or with help from the Usos or his Shield brothers or just trash talking. There are a million examples throughout wrestling history of good guys going all rough justice on their adversaries without turning heel. Nobody wondered if Dusty Rhodes and Magnum T.A. were turning heel when they did this to Jim Cornette:

Roman attacked two guys, a villain who has terrorized and corrupted six of his co-workers, and one of those corrupted co-workers who just days ago appeared to put his on a woman there. We’re calling the villainy now? Compared to what the actual villains there have doing – putting eyes out (Seth Rollins), punting old men in the head (Randy Orton), cheating to win and ending a career via assault and battery (Sasha and Bayley), putting a bounty on somebody (King Corbin) – I’d say what Roman did is quite benign. But we’ve seen this before with Roman. When he was feeding with AJ Styles and showing some edge. When he crashed Rusev and Lana’s wedding. The night after he beat the Undertaker at WrestleMania 33. When Seth and Dean came down and helped him fend off Braun Strowman the night after Summerslam 2018. Each of those was followed up with ‘is this a heel turn?’ pieces that were half dopey speculation and half wishful thinking.

So here’s what I have to say to all the people are once again speculating or asking for Roman Reigns to turn heel. Like I asked then, I’ll ask now: why exactly do you want him to turn heel? But this time I’ll add this: what exactly would this heel turn mean for you to consider it successful? Because I get the impression that we’re not seeing the same picture. A successful heel turn for me would include winning the Universal Title, beating a bunch of good guys and then maybe dropping the title at WrestleMania to someone who rises up to beat him (Big E maybe? A returning John Cena?) But I think you see one where they simply stop pushing him as a good guy, let him talk like an asshole, and then have him in the same place on the card away from any and all major titles and big matches just like you want him to be now. I have zero faith in you guys who want this to actually be cool with a good heel run from him.

Why? Because again the issue that you won’t admit to is that you just don’t like him being high on the card, period. Given the buzz that his return generated that quickly if he went heel it would blow up and then we’d be in the same boat where it would be time to start vanquishing important people and getting a title match. Which means a lot of those ‘you deserve it’ guys you love would be getting sacrificed at the altar. And I don’t trust any of you guys to sit quietly while a heel Roman Reigns MDKs Daniel Bryan on his way to or after winning the Universal Title any more than you would if he won a competitive match with Bryan or AJ Styles or anyone else working as a baby face. Your real problem isn’t how he’s presented so much as where he’s placed, and no matter how they change him they eventually have to put him in big matches for the big titles because that’s what wrestling companies do with their big guns.

There’s one last thing to consider as well. If they make Roman a full fledged heel his die hard fans who went through the fire with him for five, six, or seven years aren’t going to boo him, ever, so if it succeeds and the complainers start cheering like they’ve implied they would do, there’s a real danger of him being so cool that none of the faces can get over against him. Which means he’d turn face again and we’d be back at square one. So heel, face, or something in between (a fight anybody who’s in his way, trash talking, take no prisoners version is more than doable without making him a villain), it’s only a matter of time before we run into the same issues from the same weirdos that have been making things difficult for the last five years. He outshines everyone around him and things aren’t the same without him, which means that not just the guys that the internet doesn’t like much anymore like Strowman but the internet darlings and you deserve it guys will eventually need to be moved aside. And I don’t trust any of the people who are still going on about promos from 2015 (you know which one I’m talking about) to suddenly ‘get right’ because they were finally given the thing that they claimed would calm them down.

So here we sit again, five years in, doing the same dance. I stand firm in my support for the man no matter how he’s booked but I stand by my five year old take, that such a turn would only be to appease a group of people who are known more than anything for their ability to move the goalposts. Time to stop chasing people who are never gonna slow down enough for you to catch them, no matter what you do. So a word to Vince McMahon: trust the man, and trust the people who are already on board because he’s always come through for you and we’ve always had his back. That’s the way it is, and that’s the way it’s gonna be.