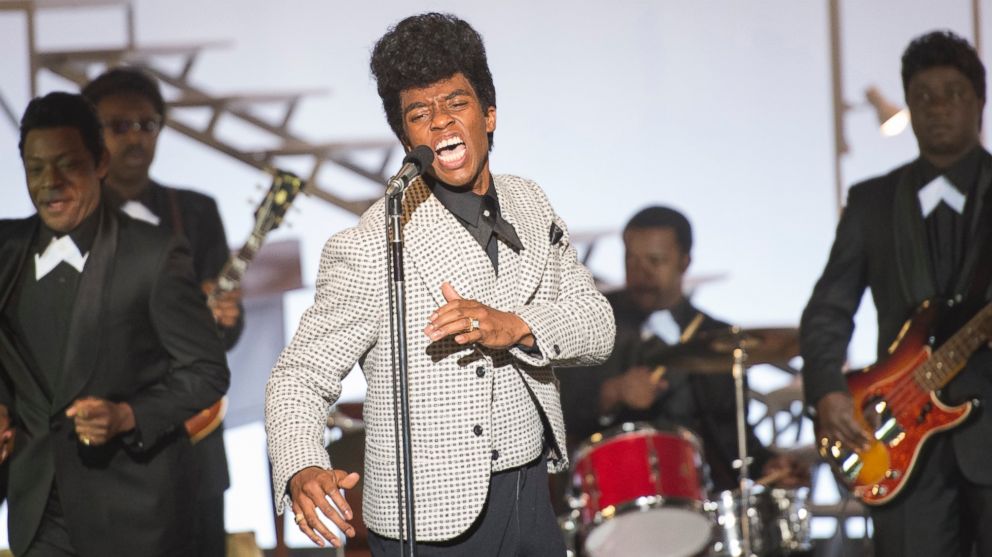 Movie Review – Get On Up

With Chadwick Boseman’s untimely passing I felt compelled to check out one of his movies that did not involve him playing Black Panther. This one was on an HBO free preview, so it won out.

The story starts flipping back and forth between James early childhood and some of his performances during his early career, and covers his rise from poverty and being abandoned by both parents to a stint in prison to the top of the music charts. It also stars Nelsan Ellis and Keith Robinson as James early band members Bobby Byrd and Maceo Parker, respectively, and Dan Ackroyd as music producer Ben Bart.

Boseman is outstanding. He nails James’ speaking voice, which is no mean feat without sounding like you’re doing an Eddie Murphy-esque imitation, his dance moves and mannerisms and everything. James had such a distinct way of speaking,, walking, singing and dancing that playing him without falling into self parody is damn near impossible but Boseman really pulled it off. He owns the screen every minute he’s on it. The supporting cast does a great job as well and complements Boseman every step of the way. It’s James story but Ellis, Ackroyd, and Jill Scott (who played his wife Dee Dee ) are able to shine in their own ways without taking away from the main subject.

The writers of the film know that what we really want to see is James in his prime, with all the big hits and a few minutes on how they came to be, along with the other moments that we’ve all heard about like when he played Vietnam and the concert in Boston the night after Dr. King was murdered. Play the hits and add in some scenes that will show people little bits of his life that maybe they didn’t take time to look up; that’s what we want and they gave it to us well. They showed enough of James childhood and and adolescent years to get across that it was rough without it dominating the film.

The overall tone was just right, mostly upbeat and the few more solemn points don’t drag you down in any way that ruins your good time. Nobody wants a 139 minute sad movie about a music legend whose work they love to death, and the filmmakers showed that they knew that. We want all the good with just enough not so good stuff so that we can say it wasn’t a total hagiography, and they delivered on that. But that does bring us to…..

Like most biopics of beloved famous people, the film minimizes the bad parts of it’s subject’s life. James had the same issues as many performers – drugs, money problems, infidelity, abusive behavior towards wives, girlfriends, and band members – but the movie only shows a glimpse of them all. It’s very similar to how Ray presented a heroin addiction as if it was just another hill to climb. Now nobody wants half the movie to be about that but it’s like they throw in a few gratuitous scenes that maybe add up to ten minutes so that they can say they did it. ‘See, we showed him warts and all!’ when a few google searches show they barely scratches the surface. Given that one of the film’s backers/producers was Mick Jagger, one of many artists who revere James, it’s not unexpected. No one makes what could appear to be a hit piece about their idols even if it’s honest. But you do lose points for any degree of sugarcoating or downplaying, the latter which they are guilty as charged of here.

This was a really enjoyable film. Boseman shines here and it’s clear to see why he became a big deal in a short time after this. It’s also easy to see how he came to play T’Challa in such a fashion that the character became so popular because here he showed just great an actor he was. Eddie Murphy’s Saturday Night Live version is so hard to set aside but Boseman was able to play it so well that you didn’t think about it. All that being said I think he carried the film here at all. The story that was told was well done and hit all the right beats while the rest of the cast more than did their part. The runtime is almost two and a half hours but it doesn’t feel like a long movie at all. Definitely recommend this one.