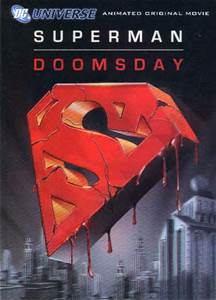 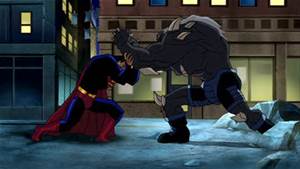 Superman: Doomsday came out in 2007, and with rumors of Doomsday being in the upcoming Batman v Superman: Down of Justice film I thought it would be a good time to take a look at the movie (ok, not really; my DVR was empty and I needed something to watch the other day).  Anyhow, here’s what I think of it all.

Superman is out and about doing his usual.  Lex Luthor has an excavation crew looking for anything he can find that might make him richer or help him take down Superman and they inadvertently let loose Doomsday, an alien that was created to be the ultimate super soldier and that can kill simply by touching living creatures.  He winds up in Metropolis, Superman comes, and the fight is on.  Superman wins but seemingly at the price of his own life.  Seeing an opportunity Luthor sets loose a Superman clone he’s created from a sample of Superman’s DNA, programmed (or so he thinks) to act like Luthor wants.  While Luthor’s clone is dealing a new kind of rough, fatal justice the original is actually recuperating in the Fortress of Solitude.  He gets healthy enough to fight again, so he meets up with the clone and the fight is on.

What worked for me

As is the case with all the Bruce Timm-produced DC animated movies they nail the essence of all the characters.  Superman’s virtuousness. Lois Lane’s intelligence, love, and determination.  Lex Luthor’s combination of disdain, skepticism, intelligence, and flat out greed.  I also liked that they didn’t use too much of the comic storyline for the movie.  The Death of Superman comic arc that this was based on definitely falls into to the seemed like a good idea at the time, cash grab hall of fame.  The elements they included (Luthor unleashing Doomsday and the monster ‘killing’ Superman) were enough.  And lastly, I liked that they kept this a Superman story and didn’t succumb to the easy trap of bringing in other characters.  Batman would have sucked up all the oxygen in the room, even if he was only there for a few minutes.  The DC animated stories did a really good job of  making Superman-centered stories.

As much as it was a good thing to leave out all the other Justice League members it made zero sense to have a funeral for Superman without any of them showing up.  And as is always the case with these, it could have gone 10 to 15 minutes longer in my book.  With as heavy a plot point as Superman presumably dying there needed to be some more fleshing out of the consequences before the conclusion.

It should have been longer and spent more time on life with no Superman, but it was still a good, enjoyable movie.  Definitely worth checking out.