OK, that was one controversial event last night.  Before I get to the elephant in the room I’ll address the other events.

Kickoff Match: Titus O’Neil, the Dudleys, Neville, and Goldust vs The Miz, The Ascension, Stardust, and Bo Dallas

Not sure if there’s any message behind the participant lineups for each team. Is Titus getting another singles run, or was he a last minute fill in for the now injured Cesaro?  And Bo Dallas?  No idea there other than there not being any other available heels to plug in.  As far as the result, four out of five survive for the face team.  Those lopsided finishes never made much sense to me unless it was to forward some angle or boost someone stuck in the one on three or four situation but hey it’s the kickoff match so whatever.

Like I said in my preview, the first one was forgone conclusion of the year.  It was still a good match and Del Rio got in a lot of offense to put some suspense into it.  In the end, Del Rio does the job as expected.  Ambrose vs Owens was also a good one, but the clean finish caught me a little by surprise.  I figured there would something to set up an Ambrose-Owens program but that looks like that’s not the move.  Still, two good matches to start off the main show and set up the Final of Ambrose vs Reigns. 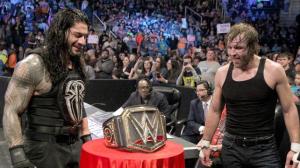 Elimination Match: Ryback, the Usos, and the Lucha Dragons vs New Day, King Barrett, and Sheamus 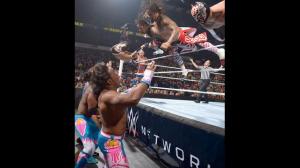 Another traditional Survivor Series match here.  Plenty of cool high flying spots from the Usos and Dragons as expected, along with a nice one from the Big Guy here: 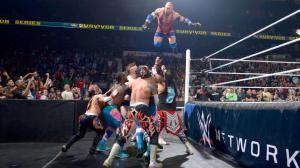 New Day did their heel act, trombone and all.  (A special side note to Xavier Woods James Brown-esque perm….wow).  The match took a kinda weird turn when Big E got eliminated and his New Day teammates bailed on the match to take him to the back, leaving Sheamus alone against Ryback, Kallisto, and Jey Uso, who promptly took him out.  It suggests the match got called for time and they had to get it over with quickly.  If so, that was a decent execution that fit in New Day’s character.

This was the only title defense of the night and it went as expected.  The crowd seemed to die out some, which is a shame because the ladies put in some good work.  They also got just over 14 minutes to work, which is a positive sign for those who support the Divas division getting more shine.  Charlotte’s clean submission victory means that this program is over and it’s on to the next one.  Here’s to the hope that we’re heading to a Wrestlemania showdown with Sasha Banks.

Shortest match of the night.  It did what it needed to, get Breeze a win in his first WWE pay per view appearance.  Yawn.

Undertaker and Kane vs Bray Wyatt and Luke Harper

Harper being Bray’s choice pretty much gave away the game here.  They got some good spots in here, and it was fun overall. 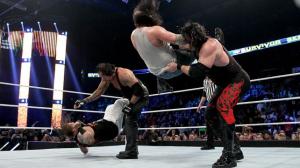 Taker pins Harper with the tombstone.  They went strictly for fan service here and that’s fine in what is likely ‘Takers farewell ride towards WrestleMania 32.  And the way it went leaves space for some more matches between the two factions.  All in all, a nice checkpoint on the road to retirement for the Dead Man. 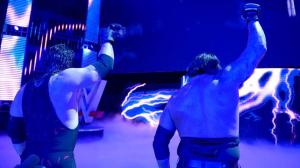 Relatively short match (just over 9 minutes) but given that they already worked earlier in the night it’s ok.  Plenty of good back and forth stuff here and no need to spend the first two or three minutes feeling each other out.  I outlined the possibilities here that I thought were on the table, and it turns out they went with a bit of a mashup.  For the particular match itself, that is.  We got Dean vs Roman, but with no heel turn or involvement from Kevin Owens. Roman wins straight up in what was a good match.  And then came……… 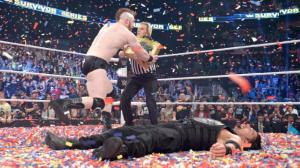 Turns out they went with Scenario 4 from my list.  Now that wasn’t the highest on my list of preferences but it wasn’t last either.  A lot of people on Twitter were absolutely pissed off about it, but I’m fine with it.  The Sheamus cash-in had to happen sometime –  either now, post Royal Rumble/pre-WrestleMania, or post-WrestleMania.  Now makes the most sense.  You’re not going to have Sheamus as defending champ at WrestleMania, and you’re not going to erase whatever happens at WrestleMania by putting the belt on him afterwards.  If you want to question giving him the briefcase in the first place that’s fine.  But once that ship sailed you can only time it right.  Given the situation they were in, it’s a good call in my book. 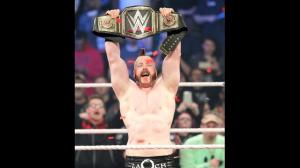 Where does this lead?  My guess is that Sheamus drops the belt at the Royal Rumble.  To who, I don’t know.  I’d go with Roman personally, and then have Roman defend the title at Wrestlemania against whoever.  Having Roman win the Rumble again would probably give us a re-run of last year’s crowd reaction.  They have to be careful how they deal with Roman; while the crowd seems to generally like him, there is a pretty vocal faction that just flat out doesn’t want him as champion and they probably won’t be appeased.  So you have to avoid situations that will cause the boo birds to unload.

Look people, the WWE is going to give Roman a shot with the title next year.  Get over it already.  You can’t ask for them to move on from the John Cena era and then get mad because they don’t start off by picking your personal favorite to do it with.  Daniel Bryan is a walking injury risk and you cannot create any kind of long term program centered around him.  Cesaro can’t talk, and he’s not going to make a quantum leap in that department now.  Dean Ambrose?  Sure, but let’s not act like they’ve forgotten him just yet.  He was in a few main events this year and will likely get another crack at one soon.  Seth Rollins already has a spot when he gets back.  And Cena isn’t going away as long as he can still work and bring in good money.  Let Roman succeed or fail on his own without any prodding from you guys.  I know you want to ‘choose’ the face of the company but that never really happens anyway.  The suits present options for you to choose from after all.

Good show.  Survivor Series continues to matter in an era of monthly pay per views and more WWE Network only special events.  You may not like the decision they made for the end but the matches were pretty much all good ones.