I went to the WWE Holiday Tour Show in Baltimore last night.  Here’s my rundown of what happened. 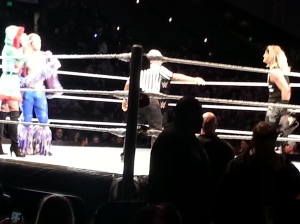 Ziggler is out here looking like Bret Michaels, circa 1990.  Breeze is out with Summer Rae.  These two guys really work well together now, having had time to do several matches together over the last month.  They hit all their signature moves and poses, and Summer Rae did a good job of interfering in the match on behalf of her man Breeze.  They’ve quickly become a good tandem and Summer has the whole distraction/outside interference game down to a T now.  There was a great sequence in the middle where there must have been almost a dozen near falls and reversals between the two.  The ending sequence came where the referee finally caught Summer’s act and sent her to the back, and then Ziggler hit the Zig Zag on Breeze to get the three count.  Both guys got good reactions from the crowd and worked them really well.  Great opener.

If this seems like a ‘take guys who have active stuff going on and throw in a bunch of guys who don’t’ kind of thing, you nailed it.  But it was fun for what it was.  We got the full New Day act, complete with Xavier Woods and the trombone outside the ring.  Woods took the unicorn bit New Day is doing now to the next level with a ridiculous unicorn hat, and the entire six man team joined in on the New Day dance routine.  The Lucha Dragons didn’t do their usual flip into the ring routine, probably due to Sin Cara’s shoulder injury from RAW.  R-Truth got a big pop from the crowd for his ‘What’s Up?’ rap entrance.  And it looks like Sandow and Axel are going to get to work again after their Meta Powers team was shut down after Hulk Hogan (who Axel was imitating) got disappeared from all WWE media after his, ahem, comments about certain racial matters became public.  The tough part to matches with this many people is making sure everyone involved get some work in without the match lasting a half hour.  They didn’t really worry about that here.  There was only limited one-on-one action, and a lot of ‘everyone in at once’ sequences.  The match finished with Sin Cara chasing Woods to the back (Sin Cara barely did anything, obviously to protect the shoulder) and Kallisto hitting the Salina Del Sol on Rose to get the pin.

Dallas got on the mic and declared that 2016 would be his year and that the Bo Dallas winning streak would start tonight (yeah, right).  Swagger comes out and does his ‘We the People’ chant (if nothing else he at least has something that gets the crowd to respond to him; too bad that he still his little to ability to communicate).  Pretty short match.  Dallas did some heel work that got the crowd to boo him.  Swagger wins by submission with the Patriot Lock.

The Bray Wyatt entrance is every bit as cool in person as it is on television.  Kane came out second, and while not having the fire shooting up from the ringposts take a little bit away from his entrance it was still pretty good.  Basic brawl here between both guys.  The ending was a bit of a shocker.  After some back and forth with some reversals Bray goes for Sister Abigail and Kane reverses it into a chokeslam for the win.  I was genuinely surprised here; I figured that if there was a match for the heel to go over it would be this one.

Sasha Banks had been advertised on the website, so her not being there was a bit of a bummer.  The crowd broke out a ‘We Want Sasha!’ chant, which prompted Naomi to get on the mic and respond in heel fashion.  The match was decent; it may be hard to notice unless you were paying serious attention to the Diva’s matches over the last several years but there has definitely been improvement all around there.  The ladies got to work an actual back and forth match that didn’t end in under five minutes, and the audience didn’t all get up to go to bathroom or stay longer if they already out there for the intermission.  I don’t think that, given the dynamics of how things on the main roster, we’re ever going to get long women’s matches a la the NXT Takeover shows but the second half of 2015 has been a real step forward towards better Diva’s matches.  Brie got in her Daniel Bryan style kicks, and got the win for her team with her X-Factor style finisher. 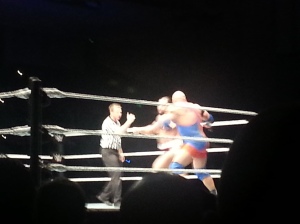 Speaking of improved ring performances….  These guys worked a good back and forth power match.  I’ve been writing about Ryback’s improved ring work all year; you have to go back and look at his 2012/2013 work to see how far he’s come.  In 2012 CM Punk at his best couldn’t even get a decent 15 minutes out of him one on one, and at Wrestlemania 29 in 2013 what was supposed to be a battle of the strongmen between him and Mark Henry had to be kept under 10 minutes so as not to expose him too much.  And he was injuring people on top of that, to boot.  So to be able to send him out there for one on one matches with a variety of opponents this year and not have to stick to five minute specials is a huge deal.  And the ‘Goldberg!’ chants are all but gone.  There were none in the house at the show and they’re miniscule at other events now, even the ones known for more contrarian crowds.  Rusev came out with Lana, but she didn’t get involved as much as usual.  The power moves both guys used looked pretty impressive and got reactions from the crowd.  Ryback won with a modified shellshock (he did the move as he normally does but without the dramatics), making the faces a remarkable 6 for 6 on the night.

Sheamus comes out first.  Reigns came out through the crowd, just he does on TV!  And it was even near the section we were sitting in.  I know that shouldn’t be a big deal but looking back at house shows I went to back in the 80s this is a big deal.  Back then they didn’t put full effort into ring entrances, and Roman would have just walked down the same aisle everyone else did.  It’s things like that which make the house show experience much better in 2015 than it was then, even though it’s not the linchpin of the business now like it was then.  The match was under streetfight rules, meaning anything goes and no countouts.  They fought down the aisle early on, almost to the entrance way, and then back down to aisle to the ring.  Sheamus pulled a kendo stick from under the ring and put it to use, followed by a chair that he used before setting up in the corner.  Minutes later Roman got a table under the ring, as a response to a ‘we want tables!’ call from the crowd. He set it up, but of course he ends up going through it.  Some more back and forth, then Reigns gets the kendo stick for some payback on Sheamus before snapping it in two.  Sheamus sets up another table in a different corner, which will come into play later of course.  Sheamus ducks a Superman punch and sends Roman into the chair for a two count, then sets up for the Brogue Kick.  Reigns dodges, hits the Superman Punch and then spears Sheamus through the table for the pin.  Very good match; Roman has done a few of these this year and has gotten good at them.  The crowd was very much on his side; he got the loudest reaction of the night by far.

Good show.  The overall house show product is much improved from when I used to go with my Dad as a kid.  Baltimore is a great wrestling town so it’s always fun to go to events there.  One of the biggest differences between house shows and RAW/Smackdown or a Pay Per View is that everyone in every match gets to work the crowd, and the crowds are generally more appreciative of everyone working.  People who come to house shows are there to see the show and not get themselves over in front of television cameras.  There were a few contrarians in the crowd but for the most part people cheered the faces and booed the heels.  Call me old fashioned but I’ll take that over what happens so often on Monday Nights or at Pay Per Views.  By anyhow, if you’re a wrestling fan and want to have a god time for a few hours I recommend checking out the WWE live tour when it comes through your town.