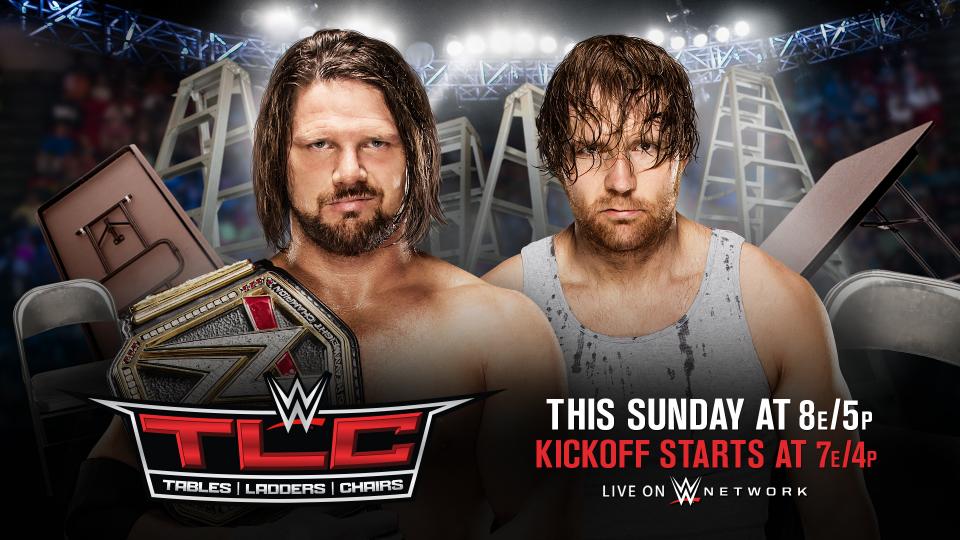 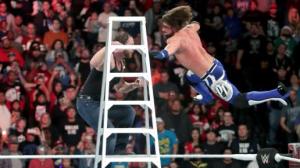 Last big show of the year Smackdown; how did it go?  With only six matches, was the card too short or just right?  Would the filler matches do their job or mess up the flow?  And would all the title matches go off in a way that left people satisfied?  Let”s find out! 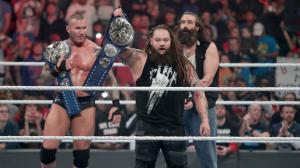 Pretty quick match here.  I think we all had the Wyatts winning the belts here but this was a glorified squash ending in just under six minutes.  The point here t get the belts on the Wyatts and start their next chapter; I imagine Slater and Rhyno will stick together for a little longer before a soft breakup in a few months.  The Wyatts are going to be using Freebird rules apparently where any two members of the trio can defend the belts.  The last three months have been a godsend for everyone who’s been up in arms over the way the Wyatts, particularly Bray, have been treated in big matches (I think that’s a bit overblown but sometimes perception rules).  But now they have a title and we can see where that goes.

Short match (7 minutes and change), but this was more like a fight anyway so no big deal.  Nothing to write home about but they kept it at the right length to keep us from checking out.  Nikki looks to be moving on to Natalya while Carmella will need another dance partner (Naomi is available so why not?).

Ladder Match for the Intercontinental Title: The Miz (c) vs Dolph Ziggler

Another great one between these two, and kudos for coming up with some ladders spots that haven’t seen (or haven’t seen in a while, I’m not sure).  Plenty of drama and near ladder climbs to keep things exciting.  This has been one of the better feuds of the year and both guys have been great throughout.  I was expecting some outside involvement on Miz’s behalf but surprisingly that did not occur.  Of course he didn’t win it completely on the up and up but it wasn’t an overbooked mess, either.  Where these two go from here is anyone’s guess.  Miz has a title to defend as he heads towards what is really looking like a showdown of some sort with Daniel Bryan even though that still seems medically implausible, whereas i have no idea where Dolph goes from here.

This was the pleasant surprise of the night.  I wasn’t expecting much but both guys did good work and the match was pretty good.  What seemed like a filler match and little else turned out to be a lot better than that.  Both guys can move on now but with the titles all being held by heels Corbin looks to be in a holding pattern of sorts until one of there’s a face champion for him to chase.  Even with the loss Kalisto could be lined up to work with Miz for the I-C for a bit. 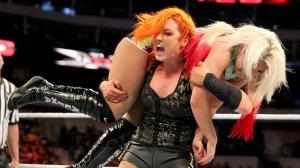 Very good match with some great moments.  A lot of cool escape the table spots before the finish.  The ladies got 15 minutes to work, a continued sign that they’re being taken seriously.  Which is good because they’re one of the consistently good things about Smackdown every week.  The finish came out of nowhere and was done in such a way that it looks fluky without making Alexa look weak in her victory for the title.  The stage is set for a rematch and the question is whether this will be

Great match, another entry into the ‘Best of 2016’ category.  AJ Styles cemented his place as the Wrestler of the Year for 2016 with his performance here, and Dean Ambrose more than kept up his end of the bargain.  A lot of great moments, but none like this: 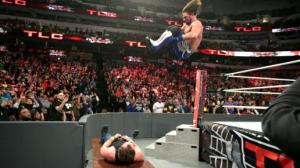 In case you’re wondering that’s a springboard 450 onto Ambrose on top of a table.  Yeah…….  And that’s just the beginning.  This match was worth the cost of the network or even the pay per view price.  As for the finish, specifically the involvement of James Ellsworth, I did say this earlier:

The only question is how does James Ellsworth get involved?  Does he accidentally cost Dean the match or does he turn on him a la AJ Lee and John Cena from TLC 2012?  I sure hope it’s the former and not the latter.  Heel Ellsworth is not something I want or think we deserve.

Ellsworth did in fact screw Dean over and cost him the title.  And while I did not want that going because we’ve seen that kind of thing so often before, I will say that they executed it perfectly so I’m not pissed about it today.  The match being as great as it was helped, and that they saved the Ellsworth part until the very end and kept it short.  Like the I-C title match, it wasn’t a ridiculous overbooked mess of an ending and that helped.

Smackdown ends the year on a high note.  Once again, keeping it simple and playing it straight from start to finish worked in their favor.  Even with a five out of six heel victory run and a clean sweep of all the title matches it still didn’t feel like a doom and gloom show.  Having a match of the year candidate as your main event surely helps.  RAW is up next in a few weeks so we’ll see how they do.