As was the case last year, the Road to WrestleMania tour came through locally here so I took in the show. With two weeks left until the biggest show of the year I didn’t expect anything earth shattering but went in hoping for a good, entertaining show which we did indeed get. I’ve seen most of the people live before but it was the first time I got to see Shinsuke Nakamura, Bobby Roode, and Jinder Mahal perform live. So here’s what went down.

Even toned down from TV Roode’s entrance is good to watch. Jinder was accompanied by one of the Singh brothers and got on the mic to talk trash for a few seconds before getting in the ring. 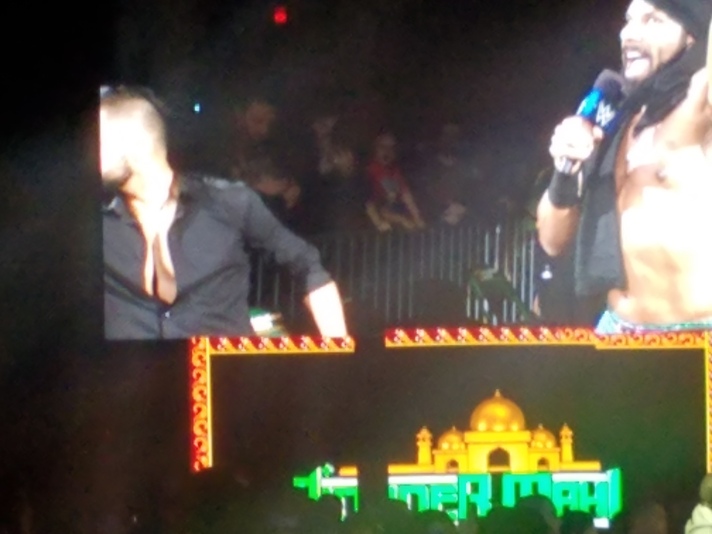 Jinder is a much better worker than he gets credit for. Maybe it was working with Randy Orton that wasn’t so great for him, but he clicked well with Roode here and the two put on a good match. 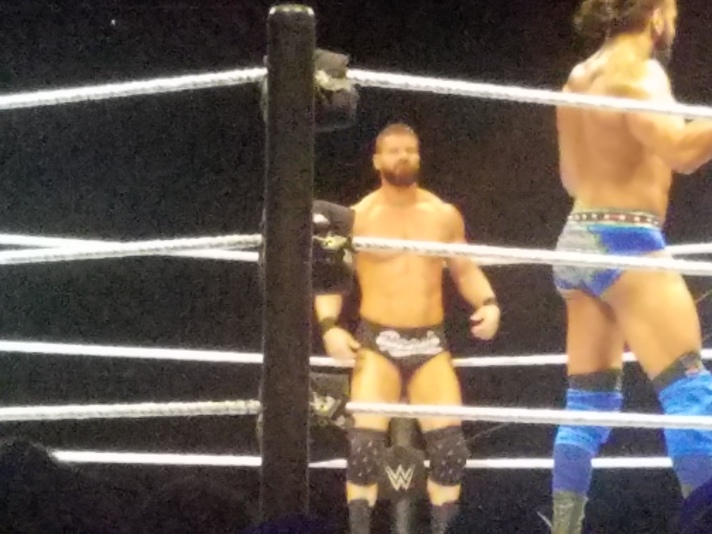 Jinder and Singh have the whole cheating heel act down pretty well now and it played into the match throughout. Roode would ultimately get the win to the crowd’s delight. The reception they got and the match they had here go a long way to explain why they’re in the position they’re in on TV and will be at WrestleMania.

Sin Cara and The Ascension vs Mike Kanellis, Mojo Rawley, and Primo Colon

Talk about your random assemblies. I had no idea Primo was still with the company or that the Ascension were working face full time now. On paper this would be death on TV, something that would trigger millions of remote controls to change the channel, but if you paid for the show you’re gonna stay and watch it. It wasn’t bad at all. Kanellis did a lot to keep the crowd interested and Sin Cara got in enough of his high flying stuff to keep things fun. The good guys won here.

Harper and Rowan were in control for most of the match here; the Usos were way over with the crowd, once again proving the genius of their character reinvention over the past year and change. We got a DQ finish and a post match beatdown to get Harper and Rowan more shine as absolute monsters going into the big three way match between these two teams and the New Day at WrestleMania.

The KO and Sami show!

Byron Saxton was announcing some prize giveaways when Kevin Owens and Sami Zayn hit the ring in street clothes and stole the mic to get a few words in about their firing from Smackdown Live before quickly running off. 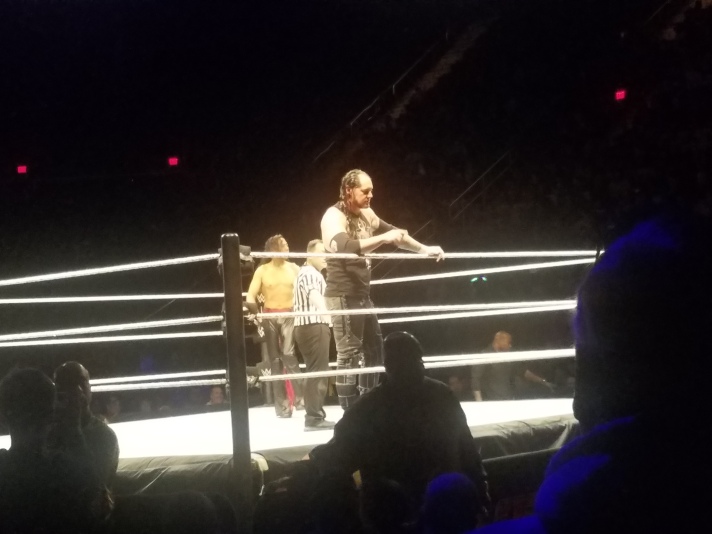 Nakamura knows how to entertain a crowd I tell you. Early on he got hold of Corbin’s T-shirt and did a full nunchuck routine which was pretty cool to watch. The match was a good ‘both guys get their stuff in’ affair; Corbin reversed Shinsuke’s first attempt at the Kinshasa into a Deep Six for a near fall in one particularly cool spot. Nakamura would eventually hit his big move to get the win.

Another ‘huh?’ matchup here. Breeze was accompanied to the ring by Fandango and I was wondering if this was supposed to be a tag team match at first. Anyway, this match demonstrated the pure fun of the house show experience as opposed to the more serious approach we get on TV. At one point Tye was chasing Breeze around the ring when Fandango started running as well, then kept doing laps around the ring even after Tye and Breeze got back. He even stopped to check his pulse. Then later on Tye went to the top rope but Breeze rolled all the way over to the other side of the ring, and kept doing it as Dellinger would go to another corner to catch up with him. It’s one of those things you had to see in person to really appreciate but trust me it was hilarious. Kudos to all three guys for finding a way to make a complete throwaway match highly entertaining.

Becky Lynch and Naomi vs Carmella and Lana (w/Natalya)

What, no Riott Squad? Everyone was surprised to see Lana as Carmella’s partner instead of Nattie. To her credit she did some halfway decent stuff in the match here. She still has a long way to go in the ring but she’s gotten a little better since starting. Becky and Naomi pretty much carried things here and got a good match out of their opponents. Hopefully, this will lead to Becky getting a win in the big battle royal next Sunday. 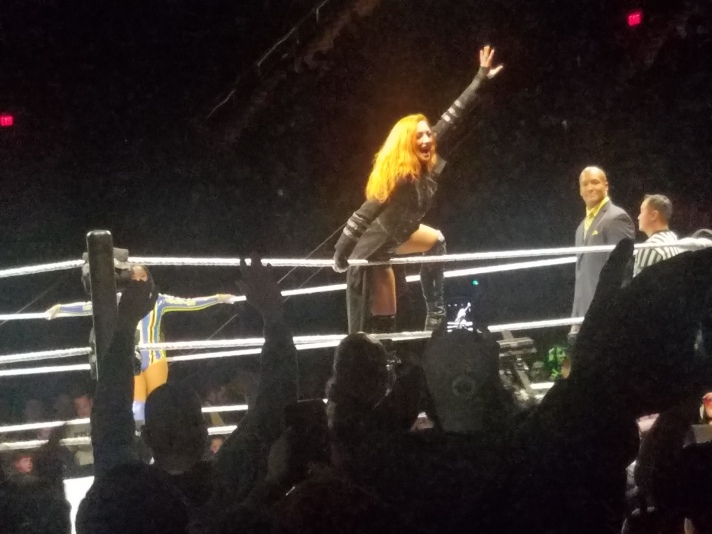 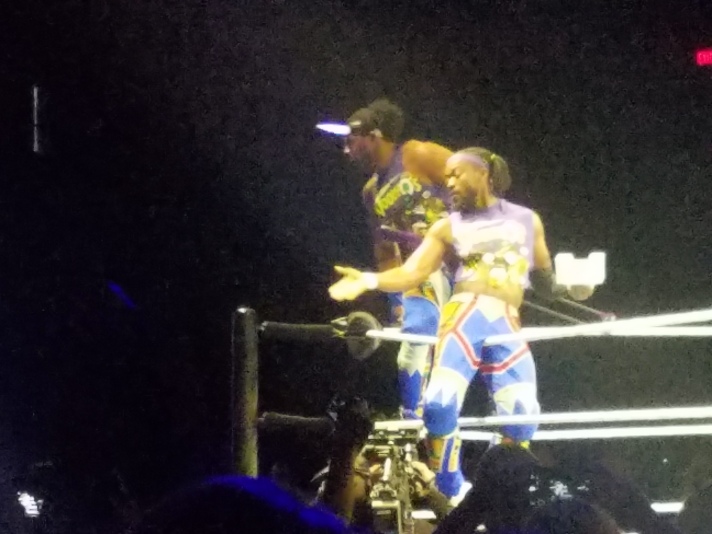 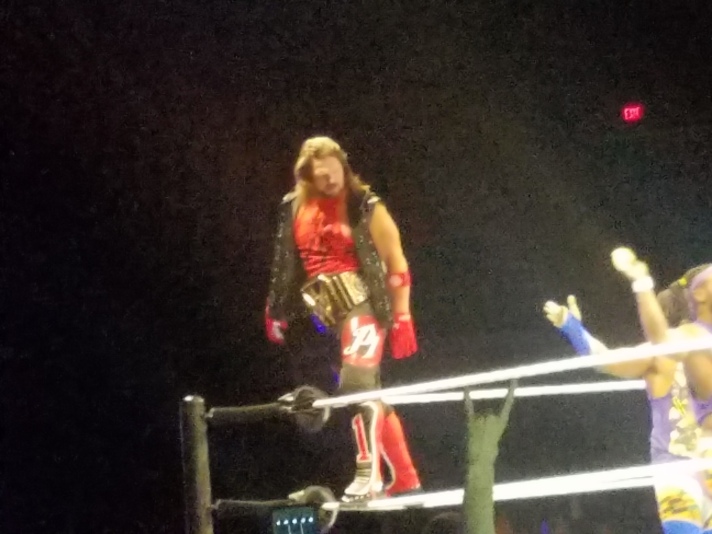 Whoever booked this deserves an award for keeping your guys safe two weeks before the biggest show of the year. New Day came to the ring throwing pancakes out to the crowd, just missing my section by a few rows. I remember the days when the guys would barely do their regular act from TV on the road but New Day leaves nothing out, ever. The match was both good and fun to watch.

There were some funny dance off spots between the two teams, and dueling chants for AJ and Rusev throughout. 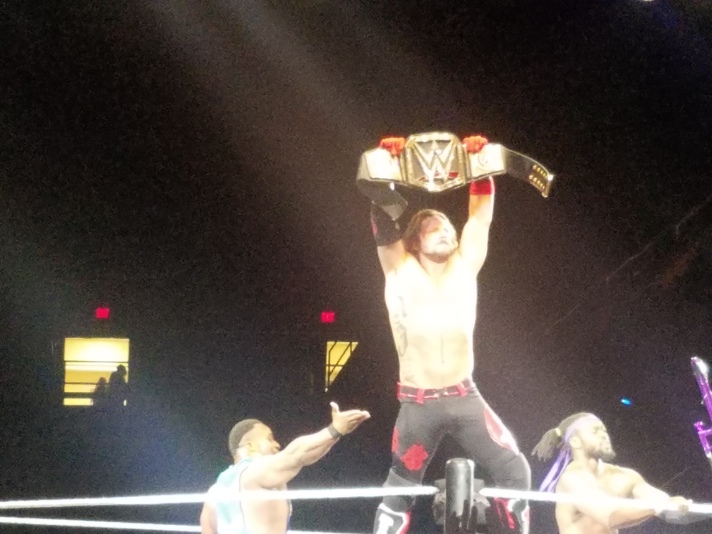 Everybody got good work in, and was able to get all their good stuff in without taking too many risks this close to the big show. The good guys won of course and got in a funny, prolonged celebration afterwards.

Fun show. The guys spent a lot more energy than usual on doing fun stuff and playing to the crowd, which makes sense this close to WrestleMania. But by no means did I feel cheated out of more serious action because of it. Shows like this are where you see the difference between sports entertainment and just wrestling. Everyone on the show was no doubt under an edict to not get themselves hurt out there and tone it down as much as possible to stay safe, and yet were able to fill in the gaps in a way that added to the show and made it a more fun time. And no, it wasn’t the kind of affair that a Dave Meltzer devotee would give high marks for but for a fun evening of wrestling it was mission accomplished.

You can see my full set of photos from the event here.

One thought on “WWE Road to WrestleMania 2018”