Final Chapters – Back to the Future Part 3

As I mentioned in my piece on Return of the Jedi, I’m going back and looking at some of the finales of previous film series to get ready for Avengers: Endgame this May. The next final chapter I’m looking at is from the Back to the Future trilogy, executive produced by George Lucas’ best bud Steven Spielberg. This trilogy centers around Marty McFly, a teenage boy played by Michael J. Fox, and his scientist friend Dr. Emmet Brown played by Christopher Lloyd. Over the course of the three films both Marty and Doc travel forward and backwards in time, both improving on and messing up the present and then trying to fix things back again. 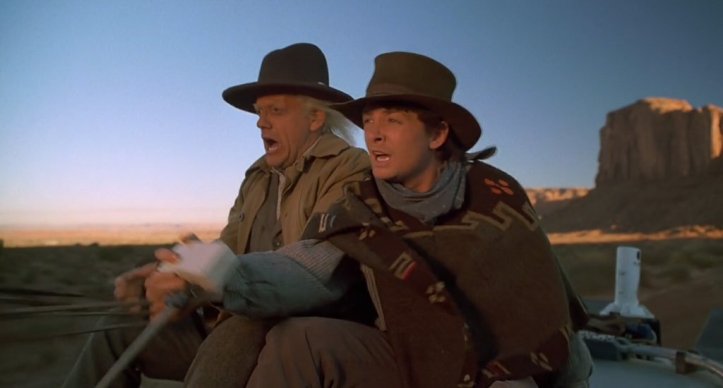 In Back to the Future Part 2, Marty and Doc Brown went ahead to 2015 to stop Marty’s son from getting in trouble, but in doing so left the time machine unattended for Biff to go back to 1955 with a Sports Almanac and give it to his younger self so that he can bet on all the winners and get rich. Which in turn screwed up things in 1985 and forced them to go back to 1955 and get the almanac away from the younger Biff to prevent him from changing the present…..whew, that’s a lot there. At the end of Doc Brown was in the DeLorean when it was struck by lightning and sent back to 1885, while Marty was stuck in 1955 again. The film ends with a western union delivery guy coming up to Marty in 1955 with a letter from Doc written in 1885 telling him where he is. So to wrap everything up Marty and 1955 Doc have to find a way to get Marty to 1885, rescue Doc, and get both of them back to 1985. That’s really it. The other problems to be solved in this chapter were introduced during the movie itself and not beforehand.

While we were sleeping

Doc Brown, stuck in 1885, chose to live out the rest of his days there so as not to mess up the timeline any more, while leaving enough clues for Marty to find in the time machine in 1955 to get back home in 1985. Unbeknownst to them all (until Marty and 1955 Doc stumbled across a tombstone and looked up an 1885 obituary) Doc was going to be killed by Mad Dog Tannen, Biff’s ancestor within a few days after he sent the letter. And that’s how the new big problem was laid on us – now Marty had to go back and save Doc from getting killed, then return to the restored present day timeline once and for all.

I would be remiss if I did not mention the friendship between Marty and Doc; in 2019 it would look really weird for a teenager to be hanging out with a man some 40 years older than him who was not an uncle or grandparent. Like Lucas, Spielberg had a way of doing these kinds of things within their stories and asking you to just accept them and not ask a bunch of questions. They didn’t do a deep dive into how these two could be such real friends because that’s not what these movies were about, and they expect you to just have fun and enjoy it without getting too serious about things.

Doc falling in love with Clare set up a choice for Doc: go back with Marty or stay in the Old West with Claire. And in either case, does he tell Claire the truth about where he’s really from or just say nothing? Marty of course was absolutely going back, but along the way he gets into a series of verbal pissing contests with Mad Dog Tannen, setting up an Old West style gunfight between the two where Marty has to choose between giving into his ego and fighting or finding a better way out.

Marty and Doc figure out a way to refit the DeLorean to get home, Doc tells Claire but she doesn’t believe him and storms off. With his own ancestor Sheamus McFly watching, Marty finds a way to deal with Tannen that doesn’t include succumbing to his tendency to fly off the handle when somebody calls him chicken. We get a spectacular finale with Marty, Doc, Claire, and a train that has to get to 88 mph before it goes off the tracks and kills them all. Marty gets home but Doc ends up taking a different path. I’ll leave it there in case you haven’t seen it yet and want to check it out.

We don’t get a whole lot of character development, at least not from my vantage point. Marty’s temper problem gets worked around without any real catastrophes. Doc begins to lament ever having made the time machine after seeing how using it can mess things up, but by movie’s end he seems to be ok with having one around. Both Marty and Doc end up where they want to be, with the women they love. Marty’s family gets restored to the much improved life they were living at the end of the first movie. 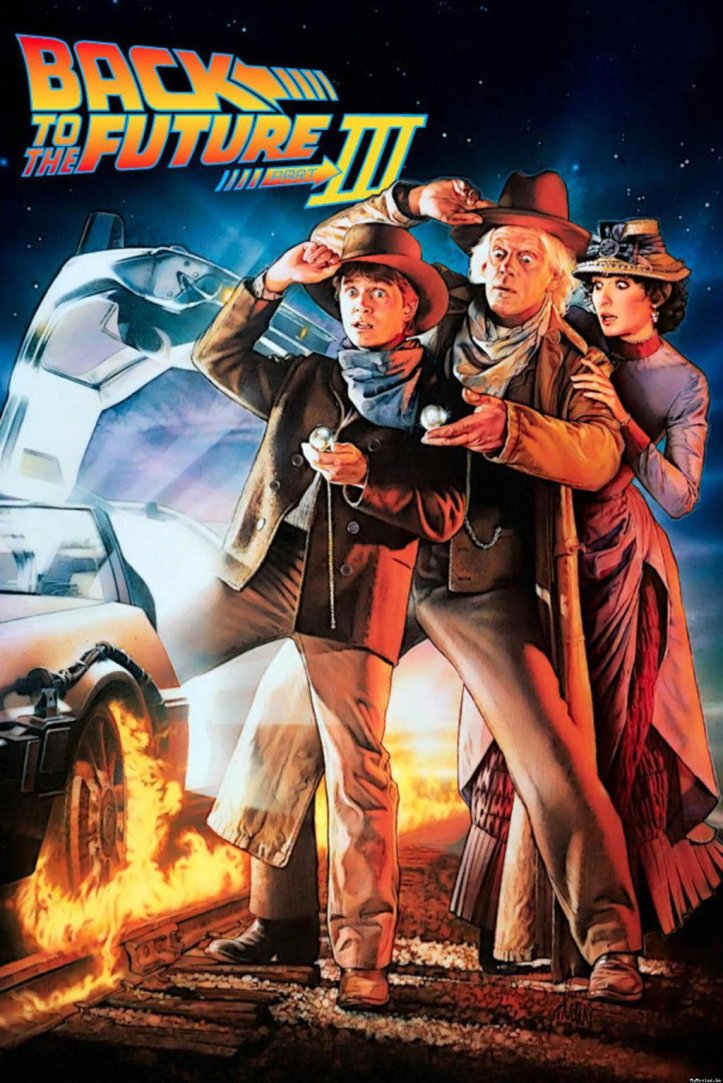 Back to the Future Part 2 was stuffed, some (including me) say overstuffed, with plots and subplots spread across three different time periods. When you do a sequel to a film about time travel you do want to expand to more periods than you did in the first but at times it felt like they were doing too much. What’s funny is that over time a lot of that sentiment changed as Part 2 made it to a few best movie sequel lists. Part 3 by contrast comes off as minimalist in it’s approach. There’s only one thing to do, find Doc and bring him home, and obstacles show up along the way to complicate it. Those obstacles come off as if the writing room said ‘well, this thing has to be more than an hour so we need to put something in there’. And after having seen the 1955 version and multiple 1985 versions of Biff and Marty’s parents, their 1885 ancestors seem a bit redundant. The movie doesn’t drag per se, but you really do just want to get to the big finale and skip all the other stuff. That finale does deliver in a big way with thrills and real suspense as to just how this thing is going to go. But then they go for a cop out ending that all but negates Doc’s big decision. And no, melancholy is not the way you want to end things but the way things were looking for a few minutes weren’t dark and gloomy at all, just very surprising.

How does it do as a final chapter? I’d say good but not great. It ties up all the loose ends just fine, but the film itself just kinda muddles along until the final act when it gets really good. I remember going to theater feeling like this wasn’t really a must see movie at all; I was interested in how it all ended but had I waited for cable or video to watch it I would have been fine. One thing that really hurt was the spacing between the releases. The first film came out in 1985, but Part 2 took 4 years to land which killed the momentum. Part 3 came out a year later (it was filmed back to back with Part 2), but by that point it was too late. The steam that had been lost waiting 4 years for the second chapter just didn’t make it all back for the final episode, which felt a lot like they spent all their energy on Part 2 and now were just trying to finish the damn thing. As it ended I felt it was a fine way to spend an afternoon – not a waste of time, but not the greatest day ever either. I’d give the film a solid B.