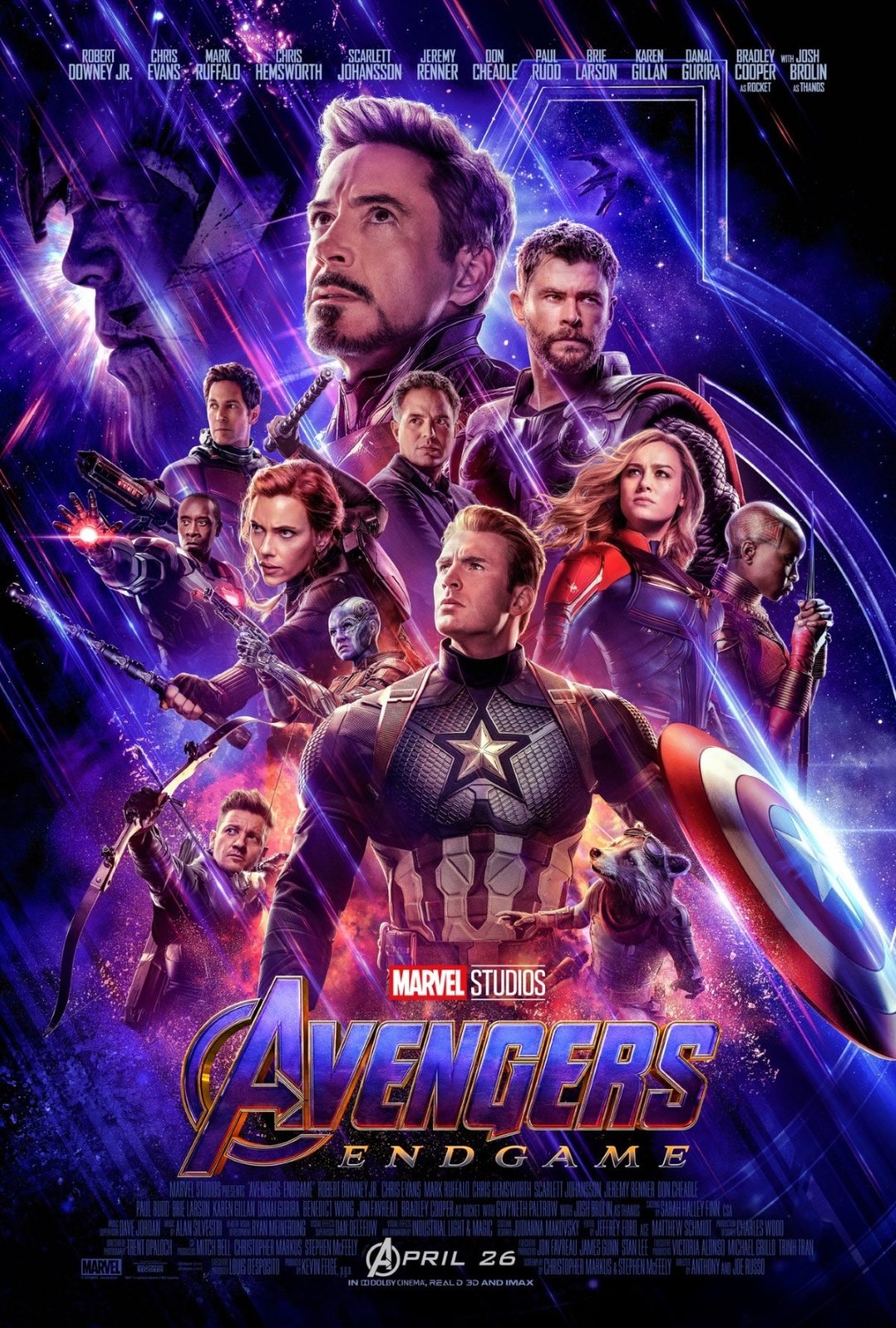 This is kinda spoilery so proceed with caution if you haven’t seen it yet.

You cannot talk about any of this without giving the highest of praise to Robert Downey Jr. His portrayal of Tony Stark in Iron Man is what got the ball rolling and was so off the charts great that it got everyone on board early and kept people on board throughout phase one where some good but not great entries were there that may not have held us without more of Downey’s Stark to look forward to. Downey got Iron Man 3, one of those movies that a lot of people don’t speak highly of in 2019, over $1 billion at the box office, and was used to introduce Spider-Man to the MCU. This thing does not succeed like this without him. And to think that 10 years ago he was a high risk actor, damn near impossible to even insure because of all the trouble he’d gotten into. Now he’s the anchor of the most successful movie franchise ever.

Now what about this movie? Let’s go!

It opened up with a bang. Thanos literally getting (temporarily) offed in the first 20 minutes was the shocker of all shockers.  I knew that something was going to happen to bring back for the big battle but I was honestly a bit perplexed as to just what the hell was gonna happen next.  The opening with Hawkeye’s family getting dusted in the snap was a real elbow to the gut, too, and him going full Punisher was quite the dramatic turn.  Most importantly of all, we got to see real effects on everyone from the original six Avengers of the snap and it’s aftermath, and the question of trying to fix what happened vs just moving on and holding on to what you have felt real.    Thor’s descent into alcoholism and obesity, while controversially played for laughs, was full of tragedy underneath.  His failure had been bigger than everyone else’s and it felt that way even as it was covered up for laughs.

The final battle scene may be the greatest onscreen fight ever. Everyone there got some time, there were several stand up and cheer moments, and Thanos got the final dealing with that he had coming in spectacular fashion. The Russo Brothers and Kevin Feige obviously knew that this was supposed to be the payoff of all payoffs, every character you’d put on the screen over 22 films together working to take down the ultimate evil.  Steve wielding Moljnir was a crowd popping moment as were the A-Force tease when all the ladies in battle joined up to help Spider-Man, Captain Marvel and Scarlet Witch each getting a turn to lay hands on Thanos, and the big arrival when all the missing Avengers showed up to help those who’d survived the snap. When it’s time to get a copy of this for home I’m betting there are going to be plenty of ‘let me just watch this part before I gotta go’ sessions.

The second act was chock full of callbacks to previous films and cameos from supporting cast members in everything from the first Avengers film to Captain America: Winter Soldier to Thor: The Dark World to Doctor Strange. It was a love letter of sorts to the entire 10 year film project and a salute to all that took part in it. And there were some really heartwarming moments with Howard Stark and Thor’s mother Frigga along with a humorous take on the elevator scene from Captain America: The Winter Soldier. There were a lot of themes at work but the ones that struck me the most were those of loving friendship (like between Hawkeye and Black Widow and Cap with Bucky and Sam) and in the words of Frigga ‘Being who you are instead of who you’re supposed to be’. A lot of the characters in the MCU were trained or raised to be one thing – future Kings, assassins, super soldiers, genius level scientists – but over time evolved into whatever was needed to win the day and carry on from there.  But it seems that some people really are taking issue with made those scenes possible, that being time travel. To which I say…….let it go.

Yes, the way they explained time travel and it’s effects was convoluted. Time travel is always convoluted. It works the way whoever’s writing the story wants it to work, period. And we’ve been fed a decades long diet of time travel stories in movies and TV from Voyagers to Back to the Future to X-Men Days of Future Past to The Flash with some common rules, particularly on affecting the present by changing things in the past. They threw all that out here and came up with their own rules to make the story work, even mocking the old way of doing things. It is what it is. There are a couple of explainers out there that spell out how all of the time travel does not contradict itself (I like this one the best.)  And look, even after reading that I’m still a bit confused about everything that went on with Steve at the end but all that matters is that he got to go back and dance with Peggy Carter like he always wanted to, and that he passed the Shield on to Sam Wilson like in the comics.

As far as who got killed off, well in my own pre-viewing notes I figured Black Widow was a goner and that Tony and Steve were both at 50/50 odds, so I picked one perfectly (Widow) and sorta was right on the other two.  I did think that once they showed Tony had a daughter born after the snap that he’d be safe and boy did they hook me in good.  I didn’t cry but it did get me a little.  And in each case of death both were killed in ways that suggest there’s no return (although with time travel on the board now, getting either or both of them back is a possibility should the desire arise.  When it comes to how they each went out, I was fine with both.  Neither of them went out like suckers and both sacrificed themselves for the success of the mission.  Widow’s character was done, especially since she and Hulk’s badly received relationship (I though it was fine, personally) was abruptly ended in Infinity War and she essentially had nothing to stick around for.  With Tony I found it fitting that his nightmare in Age of Ultron of surviving while everyone else died would get turned on its head here, and that he went in with both feet and no hesitation.

Lastly Thanos takes his place alongside the great movie villains of the modern movie era (for argument’s sake I’m going back to Star Wars as the beginning of this period since it for all intents and purposes ushered in the special effects laden sci fi/fantasy blockbuster era).  This is for my money the best big boss villain act to stretch over two movies since Darth Vader himself in Star Wars and Empire Strikes Back.)  Thanos had everything you want – a memorable look, that aura/physical presence, battle prowess, and memorable lines that you’ll be quoting down the road.  In my book he’s the best villain of the MCU so far and was worth the wait.  It literally took everything they had to hold him off, beat up on him, and finally defeat him.  No long explanations needed to convince anyone how awesome he was like we got for Baron Zemo in Civil War; all you had to do was watch the movie and you’d see it pretty easily.  This one is going to be hard to top, everyone.

OK, I think I’ve finally settled on a proper rating scale!  Don’t hold your breath waiting for me to retroactively re-grade all my old stuff but going forward here it goes:

And now………this movie gets a………….  6!!  Great movie all around, wrapped up everything that was hanging out there in spectacular fashion and put an awesome bow on 11 years and 22 movies.  Every time you sat through an MCU entry that you didn’t think much of afterwards (and by that I mainly mean that they existed to move the big plot forward more than to be singularly great entries) was validated by what they pulled off here.  Was it perfect?  Of course not.

I thought Black Widow deserved a better send off and a final Hulk out moment from Bruce Banner before settling back in with his new civilized Hulk self was missing in my opinion.  Those and no mention of the Vision (unless I missed it) at all were the only real black marks for me.  But seeing as they had three hours of movie as it is the only one I’ll stay mad about is Natasha.  As for what was done with Thor, I admittedly laughed at it all without considering how people with real life obesity issues might take it. I still don’t personally consider it a moral outrage (I’m not exactly Mr. Svelte myself) but I get if you do and won’t dare try to ‘well actually’ you over it.

All that being said, it’s on my short list of best superhero movies ever, if not best movies ever period.  If you’re reading this I hope you already saw it and on that note I give my highest recommendation to go see it again.  Multiple times.

One thought on “Avengers Endgame Thoughts”