Earlier this week a new wrestling show debuted, NWA Power, run by the oldest professional wrestling organization the NWA. For those who may not know the NWA at one time was the only kind of national wrestling body in existence; it was an alliance (the A in NWA) of regional promoters who recognized a single World Champion who defended the title in each of the different regions. Over time some of the regional promoters would split and create their own World Championships (the biggest being the AWA and what would ultimately become WWE), and all other than the WWE would eventually go under while the NWA itself would become a company in name only by the mid 90s before coming back to life a few years before the turn of the millennium (I don’t have the exact date). It meandered along for a while before being bought by Smashing Pumpkins front man Billy Corrigan, who promised that he was going to turn it into a fully functioning promotion once again. And while many people sat back with a skeptical eye, Corrigan began putting things together. The title was defended at All In in 2018, and the fabled Crockett Cup tag team tournament, an NWA staple from 1986 to 1988, was revived this year. And then came the big announcement: a new episodic TV production that would air on YouTube and Facebook Live.

Now with all the wrestling promotions on TV and streaming, from the multiple hours of WWE programming to the new kids AEW to other companies on second and third tier cable channels like New Japan, Impact, and MLW, what’s so special about this one? Well thankfully they found a hook – a return to studio wrestling. What’s that? Well, instead of filming in an arena they do it in a TV studio, which was a pretty common practice for decades. Virtually no one else does that now, so the NWA’s choice to do it is a true departure from the style of presentation for a televised professional wrestling show. Almost everyone on TV is running a variation of a WWE style presentation in an arena with the same hardcam, promo setups, a stage at one end of the building, etc. This is an entirely different animal with a old school podium set up for interviews and promos instead of in ring or a backstage setup, and without all the camera cuts that are the norm. It’s a more intimate feel, even more so than at Full Sail for NXT. And the smaller number of seats means that everyone who’s there came there to mark out and not get themselves over. 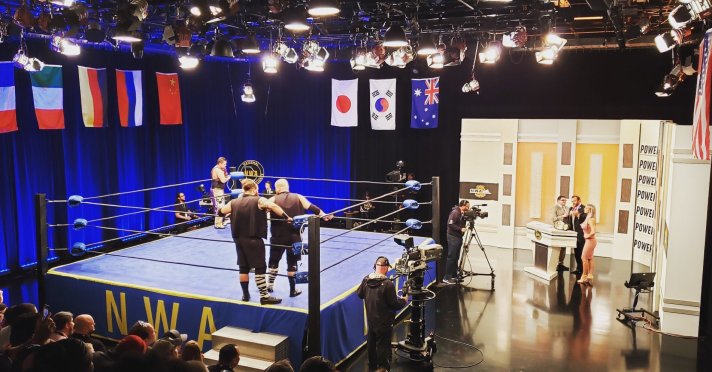 The GPB studio in Atlanta is as much a star of the show as any of the wrestlers or commentators; it’s well lit (which may seem trivial but go watch an ROH TV show and get back to me) and gives all the positives of a smaller venue without looking hokey or bush league. And seeing the flags hanging down from the ceiling just like in the old Techwood studio where Georgia Championship Wrestling and later on Jim Corckett’s World Champion Wrestling filmed their weekly show will bring you right back to 1986, in a good way. This atmosphere affects the matches and the promos as well; not having to speak to a cavernous arena makes it a lot easier to communicate without needing to get theatrical or look for a catchphrase for people to go with. Tighter shots on the ring also help get the ringwork over, which makes it less of a necessity to do big ‘pop the crowd’ spots during matches. Now the downside to all of that is that some people are going to look at it and think that it’s a minor league promotion not worthy of their attention. But I dare you to compare this to Ring of Honor’s arena TV shows, complete with their bad lighting, and tell me which is more professional of a production.

So enough about the building, what about the show itself? Was it any good? Well, yes. They had a pretty tall task to accomplish in one hour in that they had to introduce, or in some cases reintroduce, their particular cast of characters to the audience in a way that was clear and concise but without hitting us over the head with explanations. And they did a good job of just that. NWA World Champion Nick Aldis, National Champion James Storm, and Eli Drake all got turns on the mic and delivered some throwback promos that resonated better than I dare say most of the mic work out there today. All three spoke in the traditional NWA vein as men who have lived, been through some stuff, seen some stuff, and found their way into this business where you get paid to fight people. And that’s a different vibe for sure in this age of performance artists and superfans turned wrestlers. And I dare say that vibe is sorely needed, even if just as an addition alongside what already exists. Those three are all veterans of the business and sound like it. They also showed the Tag Team Champions (for now, spoiler alert) the Dawsons, former ROH World Champion Homicide and current Evolve and Indie standout Eddie Kingston.

The matches themselves were mostly glorified squashes – not total obliterations so much as competitive but mostly one sided affairs, with the exception of the main event, a World Title defense by champion Aldis vs former champion Tim Storm. The hook here was that this was Storm’s last chance at winning the title back from Aldis. There was a nice clip reel on Tim Storm to get us up to speed on who he was and why this was important to him, and then it was on to the match. The match itself was fine (I’d heard about the result before watching so there wasn’t any drama for me here); as much as Aldis looks and speaks the part I found him to be a bit meh in the ring here. Storm was very capable, especially for a guy in his mid 50s, and kept things a little bit interesting. Aldis is going to need to develop or designate some parts of his moveset as signature stuff so that the commentary team will be able to help us anticipate things and get more into his matches. He’s a perfectly fine wrestler but he’s not somebody who draws you into the match with what he does. I’m not saying he needs to do a bunch of highspots but he needs to present what he does do in a more compelling way.

So all in all, this was an excellent debut, but there’s definitely more I need to see from them. They do have a women’s division, but we didn’t see any of them in the premier episode. If that isn’t rectified in the next episode that’s a problem because they need to be presented in such a way that prioritizes them and doesn’t just treat them as a sideshow. There’s the question of whether or not their initial roster will showcase some diversity. It’s 2019 and you can’t just roll out nothing but white wrestlers without expecting to get any flack for it. There are plenty of unsigned male and female wrestlers of color out there who would do well there, and hopefully Billy has given some thought to that and made it part of his mission statement. And you can’t just wait for someone to show up, you have to go out and find them yourself. But while we wait for those questions to be answered I will give their show a high recommendation. Of all the non-WWE American companies operating (Impact, ROH, AEW, and MLW) they’re the only one I’ve seen that is offering a truly unique presentation and overall product so if you’re looking for a true alternative to the WWE product and not just pro wrestling not done by Vince McMahon you should definitely check this out