Payback is all done, and unlike other shows I’ve recapped, I went to this one in person.  Let me tell you, seeing it live is an entirely different experience than watching it at home.  For one, it’s a lot more fun being in the house and chanting along with the other fans.  And second there are some things that play a lot better in the building than on TV.  I also found it easier to sit back and enjoy the show when I wasn’t sitting next to a keyboard contemplating what I would write about it later.  Consequently, I was a lot less critical of the show than I would have normally been.  I highly recommend going to see a show live if you get the chance.  Anyhow, on to the show recap, complete with some amateur photography by yours truly. 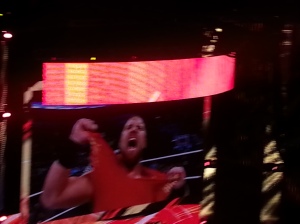 This match was pretty short.  The crowd ate up the Sandow/Axel team (dubbed the MetaPowers in honor of the Hulk Hogan/Randy Savage MegaPowers team).  Sandow came out in full Macho Man regalia and even imitated some of his moves during the match.  Axel played the Hulk Hogan role and hit all the signature Hulkster spots.  To my surprise the Ascension got the win.  The company hasn’t given up on them, apparently.  I still don’t like their finishing move; it’s not powerful enough for a team that’s supposed to be big time tough guys.  But maybe they’ll be able to turn things around in the second half of the year.

The crowd responded well to both guys.  The “You look stupid!” chant for Sheamus came out a few times.  Both guys hit most of their signature stuff, and the match was pretty good thanks mostly to Ziggler.  Sheamus does better in big man vs big man matches, in my opinion.  When he’s in there with guys smaller than him he’s often relegated to playing off his opponent’s bumping and selling.  The finish seemed to be a little abrupt, and for good reason.  Ziggler got busted open Dusty Rhodes style, and Sheamus hit a Brogue Kick almost immediately after and got the win.  I have no idea if Sheamus was booked to win initially but given that this isn’t the Attitude Era or 1980s NWA Wrestling, a face full of blood isn’t going to get a long look on camera so they had to get out of there as soon as it happened.

Man was this a great match.  Whether it was planned this way from the start or not, New Day has jumped into playing the heels with both feet and flourished.  The bit they did on the mic ragging on Adam Jones of the Baltimore Orioles, who was in the audience, was well done.  And in the ring they’ve embraced the cheating bad guy roles very well.  Cesaro and Kidd always bring it and have perfected some really cool double team moves.  And New Day’s switcheroo move to win the third and final fall is classic heel stuff.  It’s a shame the brand extension days are over because both of these teams could shine as champs defending against the other teams on the roster.  Hopefully we get another title switch or two between them before they’re done with each other.

The Bray Wyatt arena lights out, cellphone light entrance is even better in person.  This might be the winner of overachieving match of the year.  Neither man is known for having great matches, and putting them together just had forgettable encounter written all over it.  But somebody must have told them backstage ‘hey guys, just go out there, beat the crap out of each other and throw each other around’.  And they listened.  This was almost nonstop action and power moves and it exceeded all expectations.  Ryback even went up to and hit a freaking frog splash.  The finish looked better on TV than it did live but other than that this match was a true pleasant surprise.

I Quit Match for the U.S. Title: John Cena vs Rusev

It started out a little sloppy for me, but they really picked it up and pulled out all the stops.  Then they went to the crowd, and up the aisle.  Out of the four times they’ve hooked up I’d say this was this best one.  The others all had a forgone conclusion feel to them, this one didn’t even though it was pretty obvious Cena wasn’t going to be quitting.   When Rusev pulled the turnbuckle totally off I briefly thought we’d be getting a throwback to the Magnum TA/Tully Blanchard I Quit match where Magnum won by jabbing Blanchard in the forehead with a sharpened chair fragment with the turnbuckle hook playing the role of the chair fragment.  Instead we got a ring rope-assisted STF which led to Lana quitting on Rusev’s behalf.  Good effort from both guys here and a good match.

The Bella Twins vs Naomi and Tamina Snuka

Yawn.  I’m not a Diva’s match hater, but this was pretty boring.  Naomi and Tamina won like I figured they would.

This match was paint by numbers with a strange countout finish.  Neville is impressive in the ring, but it’s time to put him in a storyline and give him a chance to talk.  The high flying stuff, while exciting, only goes so far.  We know he can hang with the big boys on the roster so it’s time to make it happen.

The Main Event was lots of fun.  One thing that definitely played better in the arena was Roman Reigns dive over the ropes onto a pile of guys.  It looked good on TV but you couldn’t really appreciate the elevation he got on it unless you saw it in person.  All four guys did good work, and there was a lot of interference from both Kane and J&J Security on Rollins’ behalf.  It got a little overbooked at times, and there were stretches where two of the four guys were laying on the floor selling a beating.

There were some good set pieces during the match.  At one point we had a quasi-Shield reunion where the three former teammates combined to do their old triple powerbomb on Orton, followed by Reigns and Ambrose immediately taking out the turncoat Rollins before going in the ring together to go mano y mano in a really cool sequence. 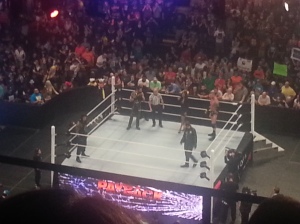 The finish seemed a bit rushed and looked better on TV.  Orton RKO’ed a bunch of people but Rollins caught him and used a Pedigree to win and keep the title.  But even with the overbooking it was a good main event.

No title changes, but the ring work was good and we had a good time in the building.  There were some really good, rewatchable matches here but no real history made.  I’d give it a solid B.