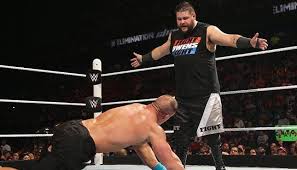 Wow.  Match of the Night, easily.  I’m not a regular NXT viewer so I haven’t had a full sampling of what Owens can do in the ring.  But wow…..for a guy his size and build to pull off some the moves he used in that match.  Cena held his end of the bargain as usual, and the result was maybe the best straight up one on one match I’ve seen this year.  It was that good.  Owens went over clean as well (I won’t hold my breath waiting for the Cena-haters out there to acknowledge that without a ‘well, actually’), which sets up the immediately announced rematch in two weeks at Money in the Bank.  My only concern is that I don’t think they can top or live up to this match.  It was that good. 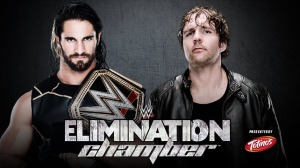 Now this was unexpected.  Rollins retaining the title was a no-brainer given the relative ad hoc nature of the event.  But going to the Dusty finish (for those who don’t know, the Dusty Finish is when what looks like a clean title win is overturned due to something that happened earlier in the match) always leaves me feeling some kinda way.  The match itself started slow for me but really picked up later; I thought Rollins did a little too much of the cowardly heel stuff at Payback but he worked more here.  He and Ambrose work really well together and I would be fine with another go round in the future.  I’m not a star rating guy, but I’d give this one a 4 out of 5. 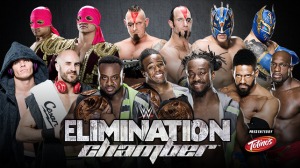 New Day won as I figured they would but kudos for the extra wrinkle that was added in allowing all three members to participate in the match.  That allowed them to keep up their heel act, which has been going great so far, and win the match without making anyone look bad.  The Ascension and the Prime Time Players got to have good runs in the match, which only helps strengthen the tag team division.  Right now things are set up for New Day to evade defeat by any means necessary until somebody, maybe the Uso when they’re ready to go again, gets the drop on them.  Until that happens enjoy a good thing they have going. 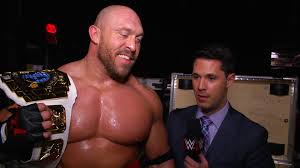 After the Cena-Owens match, this one and the Neville-Dallas match (more on that further on) were a come down.  Rusev wasn’t cleared so we got Mark Henry in his place; kudos to Mark for working on short notice and doing ok.  I was really pleasantly surprised at Ryback emerging the winner here.  I figured Sheamus would take it, and he did last until the end, but it was not to be.  You can call me happy for the Big Guy here; he’s made some real strides from when he returned to the roster back in 2012.  He won’t be in any Ironman matches anytime soon but he’s a lot smoother in the ring and has turned into a pretty decent performer, especially for a big power guy.

It was ok; it didn’t feel truncated like so many of the Diva’s matches on RAW do.  Nikki Bella won to retain the title; I’m assuming that there’s some bigger thing ahead as far when she’ll lose it.  Paige has another title run in her sometime, and a score to settle with Naomi so this is probably the last we haven’t seen of these three squaring off with each other.

The match was decent and all, but we all knew who was winning so there was zero drama.  Like I said in my preview it’s time to do something with Neville and get him off of these unimportant matches.

Good show overall.  The Cena-Owenns match alone was worth your time.  The least interesting matches, the Diva’s Title Match and Neville-Dallas, were good enough in the ring to no drag anything down.  Throw in the Main Event and the two chamber matches and and I give this a B-plus.  In two weeks we get Money in the Bank so we’ll be back to talk about that soon.