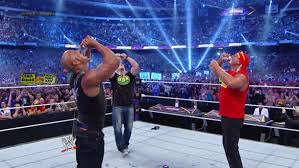 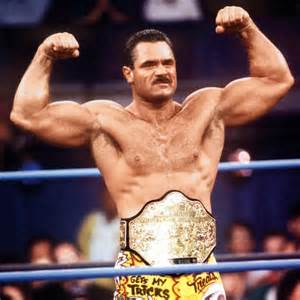 Rude came to the WWF in 1987, right after Hogan beat the last guy on the company’s list of credible challengers in Andre the Giant, and had a good run until he left late in 1990.  He would have been a physical match for the Hulkster, and having longtime Hogan foil Bobby Heenan as his manager made for a natural feud.  Unfortunately the two never had a program together, which is a shame because Rude’s style would have worked well in the ring with Hogan and he would have been a welcome detour from the two year parade of fat guys Hogan was going through post-Wrestlemania III – One Man Gang, Kamala, Big Bossman.

Rude was in one of the most memorable midcard feuds in the company’s history with Jake Roberts, and then to a feud with the Ultimate Warrior over the Intercontinental Title.  During that time Hogan was mostly without the World title – he lost it shortly after Rude became a regular in-ring performer and won it back on the same day Rude won the I-C Title at WrestleMania V.  After WrestleMania V Rude continued to work with Warrior, then feuded with Roddy Piper, and went at it with Warrior again after WrestleMania VI until he left after Summerslam 1990.  Meanwhile Hogan was defending the World Title in rematches with Randy Savage for most of 1989 and early 1990 until he lost it to Warrior at WM VI.  For the rest of Rude’s time in the company Hogan was working against Earthquake.

In order for it to happen, one of those angles would have to have been shelved for both guys.  No way you cancel Rude-Roberts or even Rude-Piper; those feuds were too hot.  Likewise Hogan-Savage was money heading into WrestleMania V and Rude-Warrior I was obvious between WM V and Summerslam 89.  There was some time though in early 1990 when Rude-Piper had pretty much wrapped up and Hogan-Savage was through.    Rude-Hogan for a few months leading into WrestleMania VI would have been a fine lead-up to the second Rude-Warrior program for the World Title that ran until Summerslam 1990.  And you could have had some DQ-style finishes so that Rude would be strong going into his second run with the Warrior.

Hey, it could have been interesting.  Rude with Heenan vs the Hulkster.  Well, there’s always WWE 2K14; both guys are on the game.