Is it time for Ronda to go to the WWE?

So after her shocking defeat last night at the hands of Holly Holm is it time for her to move on to sports entertainment?  Ronda has been openly flirting with the WWE for a good year now, so it was only a matter of time before she followed in the footsteps of Ken Shamrock, Dan Severn, and Alberto Del Rio in trading in an MMA career for a professional wrestling one.  I’m no UFC expert but I’ve seen a few people I trust on that basically say that Holm is a bad matchup for her and a rematch would likely not go much different that last night’s defeat.  So it may be the end of the road for her in UFC.  So should she go now, or stick with the Octagon and try later?  There are reasons for both.

Nobody wants to go out like she did last night, kicked in the head and knocked silly.  If she truly thinks she can come up with a better game plan and avenge her defeat then why not do that, and then retire?  At the same time most everyone else who transitioned from UFC to WWE (or came back like Brock Lesnar) didn’t end their fighting career as champ or having beaten everyone out there.  If you’re going to go you have to do it while you still have the athletic ability to work matches and the name recognition to make it worth Vince’s while to sign you to what would likely be a big money deal.  She doesn’t have time to work for another company first like Del Rio and Severn did first; her maximum cash-in time is now.

Will she be any good? 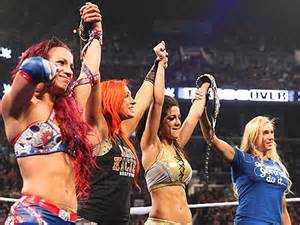 It’s just been assumed that Ronda is a natural for the WWE based on her crossover appeal, interest in the business, etc.  But that doesn’t guarantee anything.  Del Rio is a damn good worker in the ring but he comes from a wrestling family so he was well versed in the business to start with.  On the other hand Severn was….boring as hell in the ring and out, using mostly a grappling and mat based submission style.  And then there’s Shamrock, who was able to craft a pretty entertaining in ring style but was terrible on the mic.  Ronda has ready made finisher in her armbar submission hold, can strike well enough for WWE work and can grapple/throw but she needs to incorporate some other things if she’s ever going to hold her own in a WWE ring with Sasha Banks or Becky Lynch.

Will she be a big hit?

Another thing that can’t be assumed.  Early on you can put her in with Stephanie McMahon and get a great reaction.  Unless she’s terrible she’ll get over against the Bellas, too.  But when she’s in there with Charlotte, Becky, or Sasha, ladies that earned their fan followings and are great workers, if she’s exposed as not being able to keep up the boos are going to rain down quick.  WWE fans will welcome an outsider if they are serious about the business and put in the work to become good at it.  But if you’re a poser looking for a quick cashout, forget it.  They will turn on you and not in a way that says they’re giving a good heel reaction.  A ‘Go Back Home!’ chant would not be out of the question.

Does she want a real WWE career?

Only she knows that.  Shamrock became a regular and had a nice little run (about three years) in the company.  Severn flamed out after less than a year in the WWE, though.  Ronda’s young enough (28) to get herself ready and put in a good seven or eight year career if she wants it.  She could go for a title rematch with Holm first and then move on permanently.  But she might just want a quick cash out for a year or so then go back to UFC.  If that’s the case, she should go now, get ready, and work towards a WrestleMania 33 match so she can get back to the Octagon before it’s too late  She’s likely to make almost as much in even a year of WWE than she’s made in her whole UFC career to date.  The cashout window gets smaller the longer she goes on in UFC so if that’s her goal there’s no time to lose.

Several questions that need to be answered, and we’ll find out soon enough.