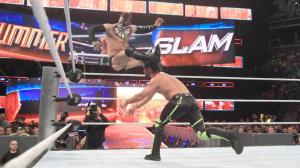 Summerslam is done and boy was it a doozy.  There was some good stuff, but a whole lot that left you shaking your head.  I’ll just jump right and let it fly.

The Brock Lesnar bloodbath appears to be a work that worked a little too well.  I doubt Randy Orton was supposed to bleed that much and need those stitches for his trouble, but Brock wasn’t going into business for himself here.  The Universal title match was much better on rewatch with the sound turned down than it was when I watched it live.  The one good thing to come out the Roman/Rusev fiasco was Roman the Destroyer returning; it really looks like the smart fans can live with him doing that as long as he’s not in the main event or the title picture.  Yes, that’s stupid as hell but at this point it is what it is.

NXT Takeover was the better show both in perception and reality; having six good to great matches in two and half hours will usually trump thirteen matches over four hours that range from great to WTF.  Throw in a more receptive crowd and it’s a no brainer.  The difference last year was not as pronounced but this year it was glaring, and that can’t be good over the long haul.  This show wasn’t as bad as the hot takes you’ve seen would suggest, but it was a mess and the feeling after it ended was the worst I’ve had all year.  The good stuff was very good but the bad stuff was so bad that it’s what you’ll remember the most.