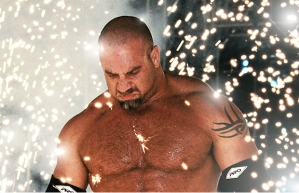 There are some rumors flying around about the possible return of two big name guys, Goldberg and Daniel Bryan.  The former is the subject of a few rumor site stories while the latter has the rumor mill working and a segment from last week’s Smackdown post-show Talking Smack.  Goldberg hasn’t been in a WWE ring since WrestleMania XX when he faced in Brock Lesnar in a match that got one of the worst crowd reactions you’ll see when the fans crapped on both guys the whole time amidst the news that both were leaving wrestling afterwards.  Bryan of course, officially retired earlier this year due to complications from all the concussions he’s suffered throughout his career.

For different reasons, both have factions that want them back.  Goldberg was a phenomenon like the Ultimate Warrior, who captivated people with his intensity and energy in the ring way more than his array of moves.  Goldberg had one of the fastest runs from debut to world champion and despite spending a grand total of six years as a full time competitor his undefeated streak and ring entrance are still things that people remember almost 20 years later.  Bryan, by the contrast, is the favorite of smart fans everywhere and the most over guy in the company during the past three years.  For a lot of people Bryan’s chance to be top dog was derailed twice, once by the front office and then by injuries (which some think were used by the front office as an excuse to further undermine him).  Whereas a Goldberg comeback would be a nostalgia run a la Sting last year, Bryan’s hypothetical comeback would be about unfinished business.  But there’s one thing both have in common for me:  I don’t want them to happen.

Goldberg in his prime was not a great worker.  His WCW matches were mostly squashes with a few ‘longer’ matches thrown in (long meaning 10 minutes and where he actually had to sell some offense).  A lot of his stuff was downright sloppy and he infamously kicked Bret Hart square in the face and concussed him nearly into retirement.  His WWE run was better, as he got paired with good workers from day one like Christian, Chris Jericho, and Triple H, and he had some good matches but even those weren’t anything great.  Seeing him at 50 years old, slower and less likely to sell for people or execute little offense beyond basic brawling and some power stuff isn’t anything I want.  And then there’s the matter of who he’d work with .  He’d obviously be on a part time schedule, and you’d have the task of getting at least a few high profile full time guys to job to him to set up a WrestleMania match or whatever.  Can you imagine asking Seth Rollins or Kevin Owens to put Goldberg over to set him up a big money match with another part timer like Triple H or Brock Lesnar?  Yikes.  (One caveat: a Goldberg-Roman Reigns match just might cause some of the so called smart fans to spontaneously combust in nerd rage.  I’m here for that)

With Bryan it’s all about health.  The guy has almost 20 concussions in his career, and he as lesions on his brain.  There is no reason for him to be back in a ring even for one match.  Yeah he wants to come back really bad but it isn’t worth it for him or us.  I don’t want to see him get concussed again and neither should you.  He doesn’t owe us anything; the man gave all he had and then some.  Him risking permanent brain damage from some of those crazy bumps he used to take and would likely take again is not something we as fans should be clamoring for.  Yes, we never got the long main event run we wanted and that he earned.  Such is life.  It’s all good until he can’t function normally at 45 years old or god forbid harms himself or his loved ones a la Chris Benoit from some CTE induced mental episode.

At least that’s my take.  i believe that once guys hang it up we need to let them go.  The business is hard on them and their families, and risking further damage to themselves or disrupting the morale in the locker room by forcing current guys to step aside and give them room isn’t what we should be asking for.  We got memories, we got the WWE Network, and we got DVDs to look up their old matches.  We even have video games where we can match Bryan against Finn Balor or Seth all day long or Goldberg vs John Cena or the Undertaker.  And right now in my opinion, that’s the best way to do those matches.