Money in the Bank thoughts

Well that was an emotionally triggering show last night to say the least.  A lot of the takes I’ve seen are judging the entire show based on the end of the opening match, which I think is a mistake.  I personally don’t find that finish all that objectionable, but I do see the argument people are making about optics and all.  But to me no matter what you think about it, that shouldn’t be the one thing you judge the whole show on.  ‘Good matches, bad finishes’ seems to be the agreed upon take in internet land but I don’t agree with that at all.  You want good matches, bad finishes go watch Great American Bash 1988.  That takes the cake for bad finishes on a show.  But anyway, let’s get to it.

My beef with the match wasn’t the finish, it was the time allotted.  They only got 13 minutes, and the end felt rushed to me.  Now as to the finish…….ok, I get it that this was the first ever Women’s Money in the Bank match and that it is a bad look having Carmella’s boyfriend win the match for her by climbing the ladder.  I won’t argue that point.  I will argue that it was not bad booking at all.  Of the five women in the match, four of them (Charlotte, Becky, Tamina, and Natalya) are fully capable of winning the Women’s Title from Naomi in a straight up match without needing to catch her in a bad situation and use the briefcase for an impromptu title match.  On the other hand, no one would buy Carmella beating Naomi without shenanigans of some kind, and when she wins matches the shenanigans involve James Ellsworth.  She wasn’t going to win that match on her own, period, because she doesn’t win any matches without cheating.

Beyond that..it’s wrestling folks.  We’ve been applauding damn near everything the Miz has been doing since WrestleMania 32, and he doesn’t win any major matches without Maryse getting involved.  Men have relied on women valets/managers for decades; with Ellsworth and Carmella the roles are just reversed.  Progression across the board in the business is going to include some women some resorting to the lowdown, dirty tactics that some men do.  This isn’t the same as when Charlotte proved she could go at a high level but Ric Flair was still interfering in her matches.  Those early 2016 women’s title matches were overbooked messes on a lot of occasions because of Ric being interjected into them.  That to me was the bigger slight; a cheating character cheating to win in the manner which they are accustomed to cheating is pretty much par for the course.  Women wrestlers aren’t going to all be paragons of integrity, some are going to be shortcut takers just like with the men.

That being said, since it hasn’t gone over well I guess it wasn’t the right call in hindsight.  I still don’t disagree with it as a decision on the front end, though.  If I were on the booking committee I wouldn’t have shot it down.  And to me the most important thing is where the story goes from here and the payoff.  Sure this was a big moment and should have been a triumphant celebration of the Women’s division but ruining stuff like that is exactly what heels are supposed to do.  If we want the women to get full immersion then that includes the tomfoolery and highjinks.  Nobody is out there mad tweeting that Maryse is emasculating Miz after the lengths she goes to in the name of helping him win so I don’t see why it’s a black mark on all of WWE women’s wrestling that Ellsworth did the same for Carmella.  It’s a work, people.

Great match, the best effort I’ve seen from New Day in some time.  Their matches had become real mail it in affairs last year as their skits and entrances were clearly taking precedence.  But the boys came to work and it showed.  The Usos have been a lot better since turning heel. Now if you want to complain about a wack finish, this was the match to do it for.  All that action for a bogus walk off countout just sucked.  I didn’t think New Day were gonna win the titles so soon but I expected some kind of finish that didn’t leave a bad taste in my mouth.  I’m not one to say that a crappy finish renders a whole match null and void, though.  Great effort all around here.

One of the big questions going into the night was whether Lana was going to be any good in the ring or Eva Marie 2.0.  Thankfully the answer was more the former and not the latter.  While she still has a ways to go she managed to get some good work in during the seven minutes they had.  I was met halfway on my desire to see Naomi get some longer match time; I was hoping for 10 instead of the five she usually gets but I can live with seven for now.  Carmella coming down to tease a cash-in was a nice touch.  I’m still hoping Naomi can get a nice lengthy title match in before she drops the title.

I don’t understand the fetish the booking committee has with people losing in their hometown but they took it to the next level here.  Not only was Orton at home but his dad and several other wrestling legends were in the front section (Good to see Baron Von Raschke still walking among the living).  This was a good match, and Jinder did a great job at old school working over of one limb to wear Orton down (it was the leg this time instead of the shoulder from their last match).  The Singh bothers didn’t interfere as much this time but did enough to be effective.  They got 20 minutes and if there was any doubt Jinder can work that should be gone now.  I’m guessing these two are done with each other beyond working house shows, but Randy spent the last two months putting Jinder over well and should be commended for that.

Breezango vs The Ascension

The Fashion Vice skit earlier in the show was the real hit here; the match only existed on the card to justify that.  That skit was great, complete with the Paul E. Dangerously old school cell phone.  The match was brief and the right guys won (Breezango of course).

Men’s Money in the Bank Match 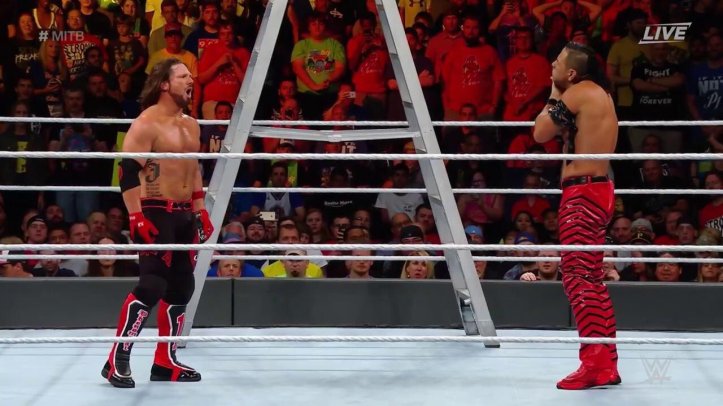 Wow….this might be the best MITB match I’ve seen.  They got almost 30 minutes to work and it paid off.  There were too many great spots to name, but the final standoff between Nakamura and AJ was a great foreshadowing of what may come later and led to a great sequence. Baron Corbin taking Nakamura out during his entrance was a great way to get heat and set up Shinsuke’s return late in the match to a major pop from the crowd (it was also a good way to keep the older, more banged up Nakamura from having to do crazy ladder bumps).  The AJ hanging image is already getting meme’d to death.  And of course Sami and KO always show out in these kind of matches; I imagine one or both of them are going to be mainstays in these matches for some time.  Corbin was the predicted winner and while I was not cool with that at first, the match did a good job of putting him over so that when he did win it felt like a good thing to me.

Final Verdict
Good show.  Don’t let people’s anger convince you otherwise.  The main event was a Match of the Year candidate and the other title matches were all pretty good to very good.  Definitely worth a watch.