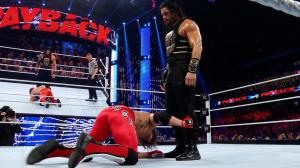 Surprising finish here.  I think everyone had Ziggler doing the honors and jobbing, and yet……he won with a rollup.  Match was ok, but felt a little short as I watched it live.  I honestly don’t know where this leaves Corbin.  He better get a rematch soon to get a win over Ziggler, which I imagine will happen as soon as Monday night. 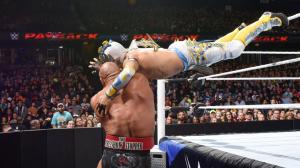 Good match here.  Lots of high flying stuff from Kallisto and some good power stuff from Ryback, which is what we expected.  Things really picked in the last few minutes leading to Kallisto getting the win to retain the title.  It’s time for both guys to move on.  Kallisto could use a good cruiserweight opponent to trade spots with; Ryback is a lot better than he used to be but everybody knows at this point he’s never going to be the main guy.

Number one contenders match: Enzo and Big Cas vs The Vaudevillains

This one ended abruptly when Enzo suffered an injury and had to be carried off on a stretcher.  Enzo was taken to a local hospital and by show’s end was announced to be talking and moving his arms, a good sign given how bad it looked when he went down.  The resolution of the number one contender spot will have to come at a later date. 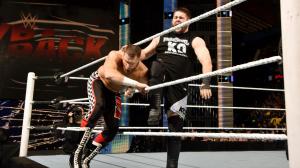 Excellent montage explaining the background to this match, and the match itself delivered.  Match of the night, easy.  These guys are going to be locking up for years to come, maybe for the WWE World Title one day.  Great back and forth, great setups for their signature stuff, and a great finish.  After winning Owens called Byron Saxton over from the announce table to interview him and cut a good heel promo before joining the announce team for the next match.

They had a tough act to follow but they did what they needed to do here.  Cesaro dominated the action and even pulled out a crossface submission hold late in the match.  Maryse helped Miz escape several situations where he looked done, and they’ve got the heel/manager act working pretty good now.  Zayn comes back down to the ring area and attacks Owens, distracting everyone except Miz who gets the rollup with a handful of tights for the win.

Good match here, but like the I-C Title match it was hindered by having to follow the Owens-Zayn match.  They hit most of their stuff.  Finish was a little sloppy but didn’t detract from the overall quality.

Well, Ric Flair made it to the arena and Bret Hart showed despite sounding like he wanted no part of it.  As for match itself…..talk about bizarre.  The ladies were given time to work and were doing pretty well; definitely a good first big match for the newly minted Women’s division.  And then came the finish.  Charlotte puts Natalya in the sharpshooter, and the ref calls for the bell even though Nattie didn’t tap out.  So almost 20 years after the Montreal Screwjob we get…the Chicago Screwjob?  After it ended it dawned on us all that the referee was Charles Robinson, aka Lil Naitch.  Which explains why he decided the match the way he did but doesn’t make it ok.  That finish blew.

Vince’s Decision on Who Runs RAW

My guess is that they dragged this out a little to cover time left over by the opening match’s abrupt ending.  Vince’s decision on who is to run RAW was not either Shane or Stephanie but both of them.  No real surprise there.

As expected, Roman got it hard from the crowd.  (Interesting note from the pre-show was the crew acknowledging the booing of Reigns and not trying to play it off or pretend it isn’t happening)  The match was very good, lots of huge spots by both guys.  And then came time for the shenanigans.  AJ takes out Reigns with a dive to the outside that put the champ through a table, and then Reigns gets….counted out?  OK………no way they were gonna end the show that way.  Shane McMahon comes out and restarts the match with no countouts.  A few minutes later Roman catches Styles with a low blow and gets DQed.  Then Stephanie McMahon comes out and restarts the match with no DQ.  Which means you know the run ins are coming.  Styles boys, Gallows and Anderson, come down and double team Roman.  Then the Usos come down and join the fray.  After a six man fracas we get the finish and Roman winning.  A lot of overbooking, making it very good instead of great, but it all served a purpose.

Very good show, and a good follow up to WrestleMania.  I love how they set up future matches for Zayn, Owens, Miz, and Cesaro without resorting to DQ/Dusty finishes.  The U.S Title match was a good one, and the Jericho-Ambrose match was pretty good, too.  No title changes but I really wasn’t expecting any after so many new champs were crowned at WrestleMania or right after.  As far as negatives, the Corbin-Ziggler match result was a head scratcher and the Women’s Title match finish was just bad.  But those are my only problems with it.  I’d have been fine paying to order this on pay per view.  Next up in three weeks is Extreme Rules and a likely batch of rematches from Sunday’s action.